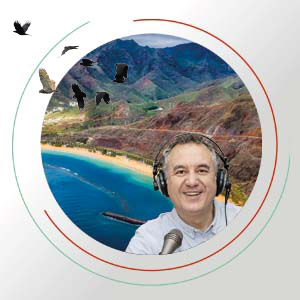 Hello again, (I'm Roberto Brasero) and I'm going to join you in this third Planet Energy podcast where we're going to talk about transformation, energy, projects, people, and cities that are restructuring to become more sustainable. Will you join me?

The wind changes direction. The energy transition permeates everything.

Sustainability, efficiency, recycling. Concepts that everyone’s talking about, but these words have to be backed up by actions.

Situations that lead us to the energy transition, which is already marking milestones, examples that change is underway.

One case that demonstrates this transition is the start of the de-installation of the Tenerife refinery, as part of the Santa Cruz Verde 2030 project, an example of public-private collaboration. A factory with more than 90 years of history that leaves the land free for green areas and public spaces that the island's inhabitants and visitors to the capital can use, which, together with the commitment to renewable energies and new forms of mobility, are a clear demonstration of the energy sector's commitment to sustainability.

Year 30 of the last century. Tenerife becomes the site of the first oil refinery in Spain with the help of Cepsa. Turning points for our country, as industrialization gains ground and paves the way for greater energy independence and autonomy in the Canary Islands. Carlos Barrasa, Director of Commercial & Clean Energies at Cepsa, explains:

"We have been operating this facility for 90 years. This facility was a pioneer at the time, not only in the Islands but in Spain as a whole. It was the first refinery and it operated as the only refinery for 20 years".

Industry for the islands. During those years the bishop even came to bless the installation. The refinery brought modernity and employment with it, becoming a symbol of the city and the people of Tenerife, of its social evolution and economic development. Carlos Barrasa:

What we're talking about is the previous energy transition. 100 years ago, when the islands had many problems developing and low energy supply capacity, this refinery led to increased economic development. Therefore we are totally connected to the Islands, but the Islands and the energy supply are also fully linked to the Cepsa brand"

The sea is a defining feature of the islands, but it’s curious how this refinery has also come to define Tenerife and the lives of its people, many of them having built their life history around it.

Rosendo Rivero, currently the director of the San Roque Energy Park and former chief operating officer of the Tenerife Refinery. He’s been working at Cepsa for more than 20 years. This is his testimony.

"Society in general is aware that the refinery, to put it plainly, has fed a lot of people. In Santa Cruz, in general, it’s rare to talk to someone on the street about it without them bringing up a family member with some connection to the refinery. I myself am a third generation Cepsa employee. Funnily enough, for a time, I was my father's boss shortly before he retired".

"We are facing a major challenge that we are all involved in, and coordination and dialogue between all actors, administrations, companies, and citizens is absolutely essential".

And this transition will also lead to the creation of a lot of jobs. The Energy Club reminds us that there will be 350,000 new jobs by 2030.

"The energy transition is going to create 350,000 new jobs, and it’s a key process to strengthen industrial development and the entire value chain in the energy field".

Within this framework, Cepsa has launched an ambitious transformation plan. The company will commit to the energy transition by investing between 7 and 8 billion euros over the next decade. More than 60% of this budget will be allocated to sustainable businesses. Maarten Wetselaar, Cepsa's CEO.

"We're going to become a leader in sustainable mobility and sustainable energy, making it easier, more affordable, and convenient for consumers to make the change to green. A long road on which we aim for the first position in Portugal and Spain.... in ultra-fast charging, in the sale of green hydrogen, in the production and sale of biofuels, and in sustainable fuels for aviation".

"Positive Motion". This is the name of Cepsa's new strategy, which is committed to promoting new green fuels such as hydrogen or biofuels, and to developing sustainable mobility. In this regard, Cepsa has recently signed an alliance with Cicar, the leading car rental company in the Canary Islands. Mamerto Cabrera, its Chief Executive Officer.

"Our commitment is to the environment and above all also to our customers".

Cepsa also wants to decarbonize air transport in the islands, and the partnership between Cepsa and Binter will make this possible. Rodolfo Nuñez, President of Binter:

"A major step in decarbonizing a business, which is the airline business, which is especially complex because the technology, all the technologies are not available, however some are, such as biofuels, and it is a first decisive step on that path, to comply with regulations, obviously, but above all out of respect for the requests of our customers".

The positive motion is underway. It’s the green transition: the planet needs it; companies are leading it.

“You have listened to Planet Energy, a podcast promoted by Cepsa to share the challenges of the present and future of energy and sustainability”