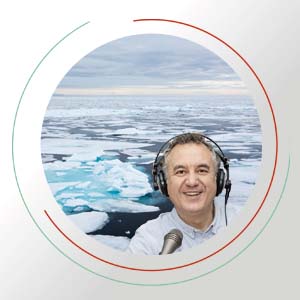 Hello, again, (I'm Roberto Brasero) and I'm joining you in this Planet Energy podcast where we’re going to talk about climate change, the challenges of taking care of our planet, and how important it is for all of us to get involved. Will you join me?

Rising temperatures, changes in weather patterns, torrential rains, and extreme climate events. Climate change is one of the great challenges we face as a society, so we must join efforts to prevent the planet's temperature from rising more than 1.5 degrees by 2030, as established by the world's major powers in the Paris agreement in 2015.

Scientific knowledge and the involvement of institutions and governments in the fight against climate change has progressed over the last few decades.

While at the beginning of the 1970s the First United Nations Earth Summit hardly offered any recommendations for environmental actions, by the end of the 1980s the expression global warming and the concern about the destruction of the ozone layer had already become part of the public debate.

This is when the Intergovernmental Panel on Climate Change (IPCC), a body for studying greenhouse warming and global climate change, was born.

Over the years, the work of this group has received recognition. So much so that the IPCC and the work of former U.S. Vice President Al Gore in the fight against climate change were awarded the Nobel Peace Prize in 2007. The words he spoke on December 10, 2007, the day he received the Nobel Prize from the Swedish Academy, still resonate today.

“The earth has a fever. And the fever is rising. The experts have told us it is not a passing affliction that will heal by itself. We asked for a second opinion. And a third. And a fourth. And the consistent conclusion, restated with increasing alarm, is that something basic is wrong”

There have been turning points in the fight against climate change: as in the case of the adoption of the Kyoto Protocol in Japan in December 1997. Its objective was to reduce total emissions of carbon dioxide and other greenhouse gases from industrialized countries by at least 5% below 1990 levels during the commitment period from 2008 to 2012. The Protocol entered into force on February 16, 2005, seven years after being negotiated by 160 countries.

In the last two decades, a lot of progress has been made in caring for the planet. The IPCC Sixth Assessment Report: Climate Change 2022, which is based on over 30,000 scientific studies, addresses solutions to curb the situation our planet is in: promoting renewable energies, sustainable mobility, establishing specific milestones for reducing CO2 emissions and promoting the circular economy. The three R's of ecology go hand in hand with this. This is best explained by the new generations.

"At school they teach us that to take care of the planet we have to apply the three R's: reuse, reduce, and recycle. If we reuse things, we help to keep temperatures from rising and we help make it keep raining."

The time has come to collaborate. The health of the planet depends on reducing emissions. Young people, companies, and institutions are doing their part.

Initiatives such as the Climate Pact, a European platform that bridges institutions and citizens and attracts young people such as Lidia Martin Velasco, Climate Pact ambassador, are emerging.

"Young people are getting more and more interested in joining these circles. The level of social awareness has grown tremendously, not only among young people, but also among all age groups and all social groups regarding the environment, sustainability, and climate change. We’ve always known that it was the case but today there’s much more information and it’s much more accessible and understandable."

The new generations are already talking openly about the consequences of global warming:

"Every summer there are more fires, and every summer it gets drier and hotter. This definitely causes instability in food production systems that we're not really prepared for. And another second problem that really worries me is overconsumption and overproduction, because overconsumption is something that my generation is very much involved in."

The productive fabric has also become aware of the need to make a commitment to the environment. Miguel Ángel Calderón, Carbon Cycle Manager, Cepsa.

"Industry contributes approximately 20% to all CO2 emissions caused by human activities. So the industry's contribution is essential to reducing CO2."

The world has set itself a challenge, perhaps one of the greatest challenges facing humanity: to reduce greenhouse gas emissions to as close to zero as possible. That's Net Zero.

The temperature of the planet has risen by more than one degree compared to the end of the 19th century. To keep global warming below 1.5°C, emissions need to be reduced by about 45% by 2030 and they need to reach net zero by 2050.

"We’ve experienced this with The Montreal Protocol. All of humanity decided to eliminate chlorofluorocarbons before a certain year, and we saw that, first, we were able to achieve it and, secondly, we’ve regenerated the ozone layer."

Working together is essential to reducing the emissions of gases that cause the earth's temperature to rise. The planet and biodiversity are at stake. But our economy is as well. As Kristalina Georgieva, managing director of the International Monetary Fund, explains.

"Climate change is a growing risk to macroeconomic stability and to financial stability. But also with the same token climate action, investment in clean technologies and in climate resilience generate green growth and green jobs. This is what the IMF is all about. Stability, employment, growth. And this is why climate is now in the DNA of our institution, at the heart of our work”.

It’s time to transform production, consumption, and mobility processes. And speeding up investments in the energy transition is essential to these transformations.

Ahead of the COP in Egypt, we have learned of a new joint report by the International Energy Agency, the International Renewable Energy Agency, and the UN, which underlines this urgency. It notes that a global investment of $1 trillion in renewable energy and more than $130 billion in hydrogen will be needed every year until 2030 to curb climate change and achieve climate neutrality targets.

Collaboration between countries, between companies, governments, and civil society will be the key to achieving this.