Podcast - The fathers of the transition 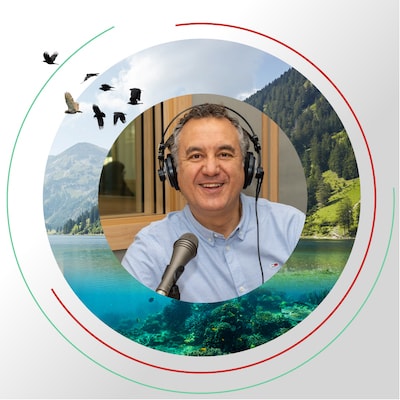 The fathers of the transition

Hello, I'm Roberto Brasero and I'm delighted to join you in this series of Planet Energy Podcasts, where, in each of its episodes, we will be able to go through different aspects of sustainability and the future of energy thanks to experts and contributors.

The planet is living a key moment in which it must face the climate emergency. Science has shown how human actions change the climate, as included in the latest report by the UN Panel of Experts on Climate Change.

A shift to a low-carbon economy and an energy transition to a more sustainable and efficient model that also responds to the increase in energy demand that will be generated in the coming decades is therefore necessary.

In this first Planet Energy Podcast we delve into the origins, the seeds of caring for the planet, which began in the last century...

“We modify the medium, we act in an impacting, dramatic way on the medium".

Have they recognized it? It is a voice with great transformative power: Félix Rodríguez de la Fuente.

He is someone who could well be among the fathers of the ecological transition, with messages and language that directly touch our conscience.

Messages that were born in the 1970s, when society was not accustomed to concepts such as climate change, sustainability, energy transition, decarbonization...

Rodriguez de la Fuente is still present 40 years after his death as a defender of nature and a great environmentalist disseminator. With his simple, direct language he was able to raise ecological awareness in Spain when the country had no movement for the defense of nature, as his biographer Benigno Varillas explains

“Above all, he brought about a change of mentality in society. In less than 15 years of professional activity, he was able to change public opinion and protect the ecological balance of this planet."

A charismatic character who entered Spanish homes with his series "El Hombre y la Tierra" (Man and Earth) and, above all, with his passion, and always with the right phrase to capture and maintain the viewers’ interest.

Some have defined him as an "agitator of consciences"... but also as someone who has the optimism of a lover of life rather than catastrophic and apocalyptic pessimism.

The figure of Jacques Cousteau takes us to the underwater world. He was one of the first people to defend the marine environment from pollution and was passionate about discovering all the species that inhabit the seas.

He unequivocally defended the right of our children to have a clean, harm-free planet. He is an environmental pioneer who emphasizes that each generation must monitor and evaluate the unfavorable impact that their decisions may have on the life of the Earth.

"These personalities are worth rescuing, to make new generations understand that environmental problems are a structural factor that we have been dragging along for centuries and now we have reached a limit and we have no choice but to act".

Cousteau denounced the devastating effects of abusive fishing, promoted mobilizations against nuclear energy, and warned about the problems of overpopulation.... and was able to convey to people the love for the sea and the life that floods it.

No doubt, in the 1950s. the issue of global warming did not have the relevance it has today...it did not "open" the news, nor did it grab the headlines...but there were visionaries who are still important today and who have now gained worldwide recognition...

Among them, the man some have called the "Michel Jordan of Climate".

“You've probably all heard of Michael Jordan, the basketball player. I have always seen "Suki" as the Michael Jordan of the weather.

This is the voice of Tom Delworth, Princeton's senior scientist in Geophysics.... And he is talking about "Suki"... so you know him a little better. "Suki" is Syukuro Manabe, a 90-year-old physicist at Princeton University, of Japanese origin, and one of the three 2021 Nobel Laureates in Physics.

In the 1960s, he laid the foundations for understanding climate behavior. He demonstrated how increasing levels of carbon dioxide in the atmosphere lead to an increase in the Earth's surface temperatures and he is considered the father of climate modeling.

“It's not just the modern climate. You know, you look back to the time when dinosaurs roamed this planet....and then you get to the Ice Age... And now we're facing a big crisis called global warming."

But not only him...another of the 2021 awardees was the German Klaus Hasselmann, 89 years old, oceanographer and scientist who has contributed to understanding the complex relationship between climate and humans, and sends messages to young people.

“I think it's very important for youth to get involved and use their techniques to raise awareness of the problem. I'm very happy that it's not just the older people, but the young people spreading the message."

All these individuals undoubtedly left their mark on past and present generations but are still present now, when the debate on global warming, the control of polluting emissions, and, ultimately, climate change has entered the agenda of society as a whole.

They are voices of reference that join many others and serve to make the younger generations turn their eyes towards the care of the environment and leaving a better planet for those who come after them.

These messages and realities have also permeated political leaders and companies, which have internalized them as one of their main strategic challenges.

"The fundamental message is: nothing is impossible. It's all a matter of decision and will."

In the 1970s, environmental degradation appeared on the agenda of the world's governments and gradually the foundations were laid for a global policy that included sustainable development. The Kyoto Protocol, which was signed in 1997, marked a point of no return with a commitment to reduce greenhouse gas emissions.

Since then, several Climate Change Summits have been held with varying degrees of success in their objectives. In 2015, the Paris Agreement marked a new milestone: it united countries for a common cause in a legally binding pact.

The truth is that, since the last century, interest and concern about climate change has not decreased and companies and governments continue to take steps towards a low-carbon economy that is also a sustainable business.

Important technological, economic and social challenges lie ahead, as well as a 2030 Agenda that meets 17 Sustainable Development Goals to protect the planet, eradicate poverty and ensure prosperity for all.

I hope it has been an exciting journey for you. Indeed, concern about the climate has been renewed, but it is by no means new. These illustrious forerunners paved the way for the task at hand today, the climate challenge.

I hope you enjoyed our podcast. We invite you to the next installment.

“You have listened to Planet Energy, a podcast promoted by Cepsa to share the challenges of the present and future of energy and sustainability".