Podcast - The circle of water 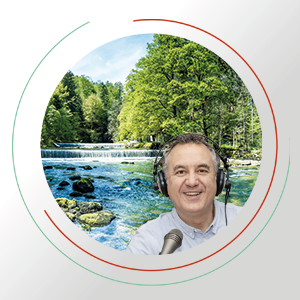 The circle of water

One of the most pleasant things you can hear in nature is the sound of water....

We identify it with life, it makes us feel closer to nature, it quenches our thirst, it makes our fields and farms grow, it gives life to the oceans...it can make the difference between living and not living...and its disappearance is one of the greatest threats to the planet.

Can you imagine living without water? It's not possible, is it?

Water is the protagonist in this new edition of Planet Energy. How to take care of it from the moment it comes to us to when we turn on the faucet...

Water is an abundant but also limited resource, and climate change and its overexploitation have caused areas of the world to suffer severe water stress, including Spain. The population is increasing and so is demand, as Eloy García, director of the Imdea Water Institute, explains.

The data provided by the United Nations is compelling: Worldwide, one in three people do not have access to safe drinking water, two in five people do not have a basic facility where they can wash their hands with soap and water, and more than 673 million people still defecate in the open.

Water scarcity affects more than 40% of the world's population and this percentage is expected to increase, according to Audrey Azoulay, Director-General of UNESCO.

We know that by 2050, more than half of the earth’s population could be living in areas subjected to water stress, due to accelerated global warming. It is a vital issue, and also a global one, because more than 60% of water flows cross national borders. We need more science and more international cooperation to address water challenges.

In order to improve water management, of its use and consumption, authorities must take measures, but as citizens we must also do our part.

Society does show a lot of concern, but it’s a rather volatile concern, since as soon as it starts to rain, even if there are still water crisis issues, as a society we’ll probably forget about them.

To solve the problems related to water, we should address others that are linked to it, such as energy use. If we want to have water reach our homes, industries, and fields, it needs to be transported there, which requires electric power.

Companies are aware of the situation and are increasing their efforts to be more efficient in their business. One example of this is the Tendam textile group, which includes different companies in the fashion sector such as Springfield, Cortefiel, Women's Secret, and Pedro del Hierro. Its corporate general manager and head of sustainability, Ignacio Sierra, explains how they work to manufacture garments using the minimum amount of water.

"Our brands are working very hard so that, at present, 100% of our most marketed product, which is denim, jeans... uses finishing and manufacturing processes that use very little water or even eliminate water from the process."

Technology is essential for this:

"We use technologies, which were also developed in Spain, such as ozone washing, purifiers in the washing processes that reuse water indefinitely, or laser printing technologies that mimic the effect of wear and tear or vintage fades.”

In the energy sector, companies such as Cepsa are committed to proper water use: they save more than 3 million cubic meters of fresh water per year. Marien Benavente is the head of the corporate environmental protection department.

"We have just approved a 20% reduction target for freshwater withdrawal, which ultimately translates into a 25% reduction in our Energy Parks, which are located precisely in the areas where it’s most needed, in what we call water-stressed areas."

Water is essential for their operations, but they are also aware that they need to use it efficiently and responsibly.

"We strive to reduce water withdrawal through various water-saving initiatives implemented in our businesses. We’re also working to improve our knowledge of the water cycle in our large production facilities, which will allow us to continue increasing the percentage of reused water.

And they go even further... the energy company prioritizes its contracting to suppliers who are also committed to the responsible use of water resources.

Water management is undoubtedly important for optimizing consumption and, as Juan Pablo Merino, Aqualia's Director of Communication and Sustainability, points out, one of society’s most far-reaching tasks in the 21st century.

"In a context that is so full of uncertainties, like the one we're currently in, having services linked to the entire water cycle - catchment, potabilization, distribution, collection, and purification - is guaranteed to bring progress to any territory.”

Aqualia is a Spanish company specialized in water management that ensures, among other things, that some 45 million people around the world have access to water in optimum condition. But perhaps we can understand this better with an example. Merino explains how, in a city like Salamanca, they have managed to save 500,000 cubic meters of water or, in other words, the equivalent of the annual consumption of a city of 15,000 inhabitants.

"This is thanks to the implementation of an innovative active pressure management system that adapts water network pressure and optimizes it according to the demand at any given time of the day or night. This pioneering system collects more than 10,000 daily pieces of data which allows us, in addition to saving on consumption, to improve the quality of service, minimize losses and increase the useful life of the pipes of the city of Salamanca, in this case."

Water availability is important, but so is its biological and chemical quality. During the pandemic we saw how Sars-Cov2 could be monitored in wastewater to anticipate potential outbreaks. The Director of the Imdea Institute, Eloy García, warns about what is coming ahead: antibiotic-resistant microorganisms and how their connection to water:

"In sewage treatment plants, microorganisms exchange genes. Under certain circumstances, an antibiotic-resistant gene can be transferred from a non-pathogenic microorganism to a pathogenic one and cause problems."

Many challenges lie ahead, such as strengthening infrastructures -which in some cases are obsolete-, the intelligent management of waste, treated water, and groundwater, or how to make better use of information technologies.

And I’ll leave you with one more fact to think about: 47% of European territory is now in danger of drought, and 17% of it is in severe warning conditions. These are figures from the European Drought Observatory. Sustainable Development Goal 6 sets out, among other objectives, to ensure that by 2030 everyone has access to safe drinking water.

Are we going to act or just sit around and do nothing?