The 17% increase in Clean CCS EBITDA was mainly due to the positive performance of the Exploration and Production business unit and the Marketing business unit (with increases of 48% and 35%, respectively, compared to the same period in 2018).

Cepsa's adjusted net profit in 2019 was €610 million, while in 2018 it was €754 million. This decrease is attributable to an environment of low refining margins, especially in the first and final quarter of the year, as well as the lower margins of certain chemical products.

In 2019, Cepsa optimized its capital structure, extending the average term of its debt to over five years. Likewise, the cash generated during the year has allowed Cepsa to reduce net debt by 11%, to €2,746 million, compared to December 2018 (excluding the impact of IFRS 16). The Net Debt/EBITDA ratio stood at 1.4x, four tenths lower than at the close of 2018 (1.8x).

Investment during the period amounted to €924 million and free cash flow was €1,152 million (before the payment of interest and dividends). The Company has made significant investment into the development of the Abu Dhabi fields, as well as projects in the Refining business unit aimed at optimizing refineries.

In terms of safety, the LWIF (Lost Workday Injury Frequency) rate, which measures the number of accidents resulting in absence from work, was 0.87 accidents per million hours worked in 2019, in line with the results from 2018. With respect to greenhouse gas emissions, the level of CO2 per ton produced remained at levels similar to those of the previous year.
Continue reading 1 min 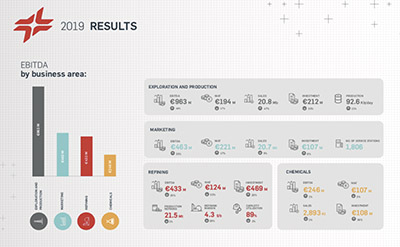