Cepsa’s adjusted net profit for the first nine months of the year, adjusted for non-recurring items and changes in inventories at replacement cost (Clean CCS), was €530.4 million, compared to €692.2 million for the same period last year.

Applying International Financial Reporting Standards (IFRS) and thereby calculating inventories at average unit cost, the accumulated net profit for the period was €659.7 million euros, slightly lower (3%) than in the same period of the previous year.

Cepsa's integrated business model has allowed it to achieve solid results, largely offsetting the lower results from Refining with higher profits in Exploration and Production. The efficiency and cost saving programs implemented by the Company in recent years have also made a significant contribution.
Over the first nine months of the year, the activity carried out in the Exploration and Production business was noteworthy, with major investments, agreements and contract awards in different countries.

During this period, benchmark Brent crude oil increased by 39%, and averaged $72.10 per barrel.

The positive impact of this price increase on our results was partially offset by the appreciation of the euro against the dollar (+7%) with an average exchange rate in 2018 of $1.19/€, and by a reduction in refining margins. Cepsa's refining margin indicator stood at $5.80/bbl for the first nine months of 2018, compared to $7.80/bbl for the same period last year. On the other hand, a 90% utilization rate was achieved in the refineries as an average for the first nine months of 2018.

The Company's turnover reached €18.4 billion in September 2018, 20% higher than the same period last year. During this period, investments amounted to €1.8 billion and net debt reached €2.9 billion, with a net debt/EBITDA ratio of 1.8.

Noteworthy among these investments is the agreement reached with ADNOC, whereby Cepsa secured a 20% share of a new offshore concession contract for the SARB and Umm Lulu fields in Abu Dhabi for a period of 40 years. As a result, Cepsa substantially increased its oil reserves at relatively low expected production costs.

In addition, the Company has focused on continuous improvement in safety and environmental management, reducing the ratio of accidents with sick leave for the eighth consecutive year to levels below one accident per million hours worked (with a ratio of 0.96 in the period from January to September) and lowering CO2  emissions per ton produced by 0.5% in the same period.

Exploration and Production
The Adjusted Net Profit of the Exploration & Production business increased by 80% compared to the first nine months of 2017, to reach €191 million.

These strong results have been due in part to the increase in the price of crude oil produced and marketed by the Company, from $50.70/barrel in 2017 to $67.60/barrel in the first nine months of 2018.

Efficiency and cost reduction programs implemented by the Company in recent years also made a significant contribution to the segment's solid results.

Working interest production amounted to 86 thousand barrels/day, 8% less than in 2017, mainly due to the natural and expected decline of certain fields.
During this period, 9.9 million barrels of crude oil were sold, compared to 10.9 million the previous year.

From January to September, the Company continued invest in growth in the Exploration and Production segment, with a total investment of €1.5 billion, to further strengthen the integrated business model. The principal milestones of this period included:

In the framework of a new alliance with ADNOC, Cepsa secured 20% of the concession for the SARB and Umm Lulu fields, as well as two smaller ones: Bin Nasher and Al Bateel, all of them located in shallow waters off the coast of Abu Dhabi. This is a 40-year concession for which the Company contributed $1.5 billion as an initial participation fee.

The signing, together with Sonatrach and Alnaft (Algerian National Agency), of a new concession contract for the development of the Rhoude el Krouf field (RKF) in Algeria. The goal of this new 25-year agreement is to significantly increase the extraction of crude oil and produce liquefied petroleum gas (LPG) at this field for the first time using the most modern hydrocarbon recovery techniques.

Furthermore, the company has increased its stake in the Bir el Msana (BMS) field in Algeria from 45% to 75%, following the acquisition of Petronas's interest in the operation.

Finally, together with its partners Sonatrach and Total, Cepsa has put into production the Timimoun gas field, which is expected to produce five million cubic meters of gas per day at peak production. Cepsa's stake in this field is 11.25%.

The award, alongside Pemex and Deutsche Erdoel Mexico, of three hydrocarbon exploration blocks in Mexico. The three areas are in shallow waters in the Tampico-Misantla basin in the Gulf of Mexico, where Cepsa will have a 20% stake.

Refining
The increase in the price of crude oil and the weakness of the U.S. dollar affected the adjusted net profit of this segment, which fell from €369 million in September 2017 to €163 million from January to September 2018.

In the period spanning from January to September 2018, 118.9 million barrels of crude oil were distilled, with 90% of the refineries' distillation capacity utilized and a production of 16 million tons of petroleum derivatives, in line with the same period of the previous year.

During the first nine months of the year, a significant investment effort (€241 million) continued to be made in the Company's refineries for maintenance, improved efficiency and conversion purposes. These investments include the start-up of the project to optimize the aromatics plant at the Palos (Huelva) refinery. With an investment of over €45 million, it is expected to improve the efficiency and integration between Cepsa's refining and chemical facilities in Palos de la Frontera (Huelva).

During this period, various scheduled maintenance shutdowns were carried out on several units at the Palos (Huelva), San Roque (Cádiz) and Asesa (Tarragona) refineries.

Marketing
Over the first nine months of the year, the Marketing business area posted an adjusted net profit of €124.3 million, down from €157.2 million in 2017. This is partially due to the fact that 2017 adjusted net profit included the offsetting (€42 million) of the negative effect on the company's margins of the LPG cylinder price regulation from 2009 to 2012. Excluding this effect, profits would have grown by 8%.

In the first nine months of the year, the Company invested €63 million in Marketing in order to maintain its facilities and strengthen its market share across the channels where it operates.

Sales in the Marketing segment amounted to 16 million tons, in line with the same period last year. This includes the network of service stations, marketing of fuels through wholesale channels, marketing of jet fuels for the aviation market, sale of bunker fuels in the main Spanish ports and, outside Spain, in Panama and Fujairah, as well as the sale of lubricants, asphalts and liquefied petroleum gases (LPG).

Under its expansion and diversification plan, the Company has reinforced its range with the launch of Cepsa Hogar, which includes the marketing of natural gas, electricity and fuel in a single commercial package for the end consumer.

The surfactants business line (LAB, the raw material for biodegradable detergents in which Cepsa holds a global #1 position, and Alcohols) performed in line with expectations, although slightly below the previous year due to the costs associated with the first months of operation of the alcohol plant in Dumai (Indonesia). The Phenol-Acetone line (raw materials for the production of next generation plastics in which Cepsa holds a global #2 position), has performed in line with the same period in the previous year.

Sales reached 2.2 million tons, 5% higher than the same period last year, and investments in the chemical business amounted to €51 million. These investments include the project to expand production at the Puente Mayorga chemical plant in San Roque (Cadiz), which will increase the plant's production capacity from 200,000 to 250,000 tons of LAB, and will involve the implementation of Detal technology, developed by Cepsa and UOP, to improve its efficiency. The start-up is scheduled to take place in 2020.

Operating cash flow, which shows the group's cash generation capacity, amounted to €952 million in the first nine months of the year, up 28% on the previous year. Strong results from the Exploration & Production business area and the lower consumption of working capital have offset the negative effect on cash generation resulting from lower refining margins.

With regards to cash flow from investments, the significant level of investments made in 2018 is worth highlighting, especially with the investment of $1.5 billion to secure a 20% stake in the concession for the SARB and Umm Lulu fields in shallow waters off the coast of Abu Dhabi.

As a result of this significant level of investment and despite the good performance of operating cash flow, free cash flow before dividends was -€862 million at September 30, 2018, compared to €223 million euros over the same period last year.

In the first nine months of the year, the company's net debt increased by €1.113 billion to finance the growth investments made. Leverage (measured as net debt/net debt + equity) stood at 35.2%, with a Net Debt/EBITDA ratio of 1.8x. 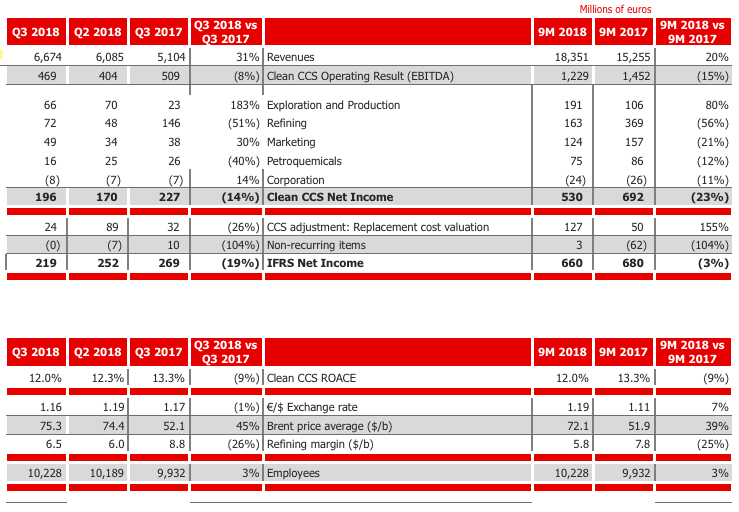