Madrid, July 5, 2018.- Poor eyesight is one of the top risk factors when at the wheel. Nevertheless, over two million Spaniards drive knowing that they cannot see properly. This is one of the findings of the study entitled ‘Eyesight and driving: habits and perceptions of the impact of eyesight on highway safety’. Over the summer – the peak season for road trips – the Essilor Group, a world leader in contact lenses, the International Automobile Federation (FIA), the Royal Automobile Club of Spain (RACE) and Cepsa will therefore join forces to raise awareness among drivers of the importance of having their vision tested and protecting their eyesight to improve highway safety.

The results of the study on eyesight and driving involving over 3,000 Spanish drivers show that although Spaniards are aware vision is one of the main senses used behind the wheel, there is still some way to go to make people aware of this issue across Spain. “Two of every three drivers in Spain believe their eyesight affects highway safety but at the same time, 50% of drivers do not have their eyes tested at least once a year. And what is even more worrying, one in three Spanish drivers still refuse to believe their eyesight can affect driving safety,” highlights Pedro Cascales, Country VP of Essilor España.

In order to remedy this, a campaign under the slogan ‘Road safety starts with good vision’ has been launched to coincide with the first major exodus of people going on vacation this summer. The aim of the campaign is clear: to make people aware of the importance of having good eyesight when behind the wheel. Throughout July and August, drivers stopping at one of Cepsa’s gas stations across Spain will be able to obtain information on recommendations for getting their eyes tested and protecting their vision when driving. The impact of the campaign will be enhanced by the fact that Cepsa’s gas stations are located throughout the country and at key points on the expressway and highway network, serving more than 500,000 people a day.

“It is recommended that people get their eyes tested every year to ensure they are safe behind the wheel. Eyesight is as crucial to road safety as wearing a seatbelt or helmet in the case of motorcyclists” explains Juan Carlos Martínez Moral, dean of Spain’s National College of Opticians and Optometrists.

In Spain, 92% of drivers believe they have 20-20 or decent vision. What is of concern is that 8% confess to driving even though they know they have difficulty seeing; in absolute terms, there are over two million drivers according to the driver census in Spain.

Lack of awareness about eyesight and driving in Spain
The key findings of the study show that most drivers in Spain recognize their vision has worsened in recent years, which they notice especially when driving at night (30%) and when seeing traffic signs and information panels (17%).

The research also highlighted the lack of importance drivers place on their eyesight when preparing a road trip compared to checking their vehicles. While most drivers always or almost always check their vehicle’s tires (71%) or oil levels (56%), 70% of drivers never get their eyes tested before a long road journey.

Primary risk factors behind the wheel
Having tired eyes is one of the main risk factors as far as driving and vision is concerned, especially on long road journeys such as those made at this time of year. “The Directorate-General of Highways recommends stopping to rest every two hours or 150/200 kilometers. Breaks are crucial to avoiding tired eyes: a risk factor when driving, which was recognized by 90% of survey respondents,” explains Tomás Santa Cecilia, RACE Director of Highway Safety. That said, 72% of drivers confess to never stopping for a break to rest their eyesight; a figure that rises to 80% among people of 56 years of age and over. This is a surprising figure given that eyesight problems increase with age.

Being dazzled while behind the wheel is another hazard to be aware of. Around 80% of drivers said they have been blinded when driving, while three out of four acknowledged that this has affected their ability to drive safely. Nevertheless, half of drivers do not use polarized sunglasses when they drive.

Furthermore, one in five confess to seeing traffic signs late when driving and three out of ten survey respondents also reacted late because of problems with their vision.

A necessary highway safety campaign
The study also revealed that 70% of drivers in Spain use their vehicles every day. Cepsa’s Proprietary Gas Station Network and Non-Oil Businesses Director, Belén Mateo, underlines the need to constantly strive to enhance highway safety: “Our company is committed to highway safety, and supporting any campaigns in this area is in our DNA. In this case, we wanted to make our network of over 1,500 gas stations available to raise awareness among drivers and encourage safe driving. We will always back any prevention projects in this area.”

Visual aids on the road
Anyone needing help to see properly must use visual aids such as glasses or contact lenses at any time of day, especially when driving. Six in ten of those asked said they use a visual aid, with people between 46 and 65 those who most use them. However, 30% said that the sunglasses they use for driving do not have prescription lenses.

The ‘Road Safety Starts with Good Vision’ campaign being championed in Spain by the Essilor Group, the Royal Automobile Club of Spain (RACE) and Cepsa is part of a global master collaboration agreement between the Essilor Group and the International Automobile Federation (FIA) resulting in the launch of educational and awareness campaigns targeting drivers, motorcyclists, cyclists and pedestrians to improve highway safety.

About Essilor
Essilor is the world’s leading contact lens company, whose mission is ‘to improve lives by improving sight’. To achieve this, one of its objectives is to offer the best eyesight solutions through technological innovation to help the 4.5 billion people around the world who have impaired vision. The company invests over €200 million per annum on R&D and innovation to bring products to market that help fulfil this important goal.

For the seventh year in a row, Forbes ranked Essilor as one of the World's 100 Most Innovative Companies. Some of the brands sold by Essilor in Spain are: Varilux®; Transitions® and Eyezen®.

About the Royal Automobile Club of Spain (RACE)
Founded over 100 years ago, the Royal Automobile Club of Spain currently has over eight million users. It provides exclusive automobile and travel-related services to its members and customers. These services include breakdown assistance, tire and repair warranties, access to VIP suites, fine claims, discounts around the world, insurance brokerage, travel agency services, and many other benefits.

The RACE is a founding member of the FIA and also part of ARC Europe – the most important international network of automobile clubs in Europe serving over 40 million customers. Since its incorporation, the RACE Foundation has conducted studies and research on the history of the automobile, boasting a collection of vintage vehicles and one of the most complete archives on the automobile. Of course, it also owns the Jarama motor racing circuit that is 3,850 meters long and has 13 bends; Jarama was the only permanent circuit in Spain for two decades, playing host to the F1 Grand Prix. In the innovation and technology sphere, the RACE has developed mobile apps for its members such as the Roadside Intelligent Network (RIN) system integrated with its breakdown assistance service to find vehicles using geopositioning; and a smart phone-based vehicle servicing monitoring and notification service. It has also brought its experience to projects such as e-call.

About Cepsa
Cepsa is a global energy company, which operates in an integrated manner at all stages of the hydrocarbon value chain as well as manufacturing products from plant-based raw materials and having a presence in the renewable energy sector. Mubadala Investment Company, one of the largest sovereign wealth funds in the world, is the only shareholder.

With more than 85 years of experience and a team of nearly 10,000 professionals, with technical excellence and adaptive capacity. It is present on all five continents through its business areas of exploration and production, refining, chemicals, marketing, gas and electricity and trading.

STUDY FACT FILE
‘Eyesight and driving: habits and perceptions of the impact of eyesight on highway safety’Sample: Quantitative survey involving 3,026 interviews with drivers holding an automobile (B1) license
Driver census in Spain: 26,504,480 (2016 figures, Directorate-General of Traffic)
Sampling error: 2.2% at a confidence level of 95%
Survey method: Online interviews
Fieldwork date: May 2018 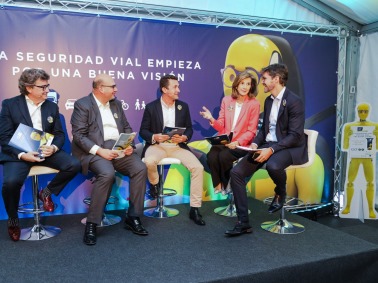