The use of 100% renewable electrical energy in Cepsa's chemical plants in Andalusia in 2019 has led to a significant reduction in CO2 emissions derived from the manufacturing of chemicals, thus contributing to improving air quality.

As part of Cepsa's commitment to reducing the carbon footprint of its industrial activity—across the whole supply chain, right through to when the final product reaches the consumer—its chemical plants opted to run their production activity on 100% renewable electrical power, supplied by Cepsa's Gas and Electricity area. This translated into a reduction of 129,300 tons of CO2 produced in 2019, which is equivalent to the yearly emissions of some 100,000 homes.

With this measure, Cepsa is in line with one of its priority objectives: Sustainable Development Goal (SDG) No. 7, which is to promote affordable and clean energy. For Jesús Ivars, the Head of the Palos and Puente Mayorga chemical plants, "using 100% renewable energy in its manufacturing processes confirms Cepsa's commitment to meeting the Sustainable Development Goals, by significantly reducing its carbon footprint and thereby contributing to a better environment for everyone."

The multinational energy and chemical company's Gas and Electricity area has been supplying electrical power for 15 years, and from renewable sources since 2011. Cepsa supplies the energy consumed by the San Roque and Dos Hermanas LPG plants, the fishing posts and the Bioenergía plant in Andalusia. It also supplies the energy for its directly managed service stations in Spain and Portugal, the Alcalá de Henares Research Center, Torre Cepsa in Madrid, and, as of a few months ago, the ultra-fast IONITY charging points. It also sells renewable electrical energy to industry and small- and medium-sized businesses, which make up a portfolio of over 1,000 customers.

Moreover, Cepsa has over 30 years of experience in electricity production in its cogeneration and combined cycle plants. The company also recently made its debut in wind-generated power, made possible thanks a 35.7-million-euro investment in Jerez (Cádiz) to build a wind farm. This park, named Alijar II, has 11 wind turbines with an installed power of 28.8 MW and an estimated production capacity of 72 GWh (equivalent to the annual energy consumption of over 20,000 homes).

The chemical industry is one of Cepsa's driving forces as it strengthens the company's internationalization and has the highest growth. This is made possible thanks to the full integration of other industries, such as refining.

The chemical plant in Palos de la Frontera (Huelva) opened in 1976 to produce and sell methylamine and its derivatives (dimethylformamide and dimethylacetamide). In 1978, it began to manufacture basic petrochemicals such as cumene, phenol and acetone and, finally, in 1997, alpha-Methylstyrene. At present, it is the largest integrated phenol, acetone and cumene plant in the world.

The Puente Mayorga (San Roque, Cádiz) chemical plant was inaugurated in 1969, producing linear alkylbenzene (LAB). The Puente Mayorga plant is fully integrated with the Gibraltar–San Roque refinery, from which it receives the raw materials used in its process. It also manufactures paraffin, which in turn is the basis for LAB, for Cepsa plants not only in San Roque but also in Brazil and Canada. Cepsa, thanks to these three industrial centers, is the world leader in the sector. 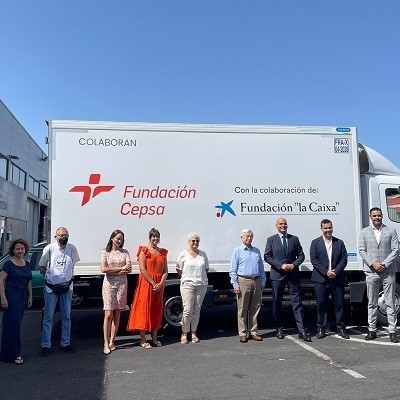