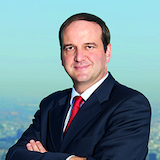 Mr José Téllez is a Law graduate and joined Cepsa in 2014 as head of Legal Corporate Affairs, a position he still holds. He started his professional career at Ernst & Young, and was named as a Senior Associate there in 2008 specializing in Mercantile and M&A Law. In 2014 he was named as Deputy Secretary to Cepsa’s Executive Board, and to Cepsa’s Auditing Board.