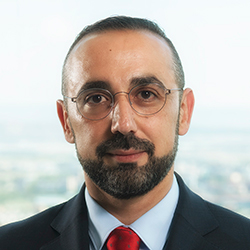 D. Marwan Naim Nijmeh is the Deputy Chief Legal Officer at Mubadala Investment Company based in Abu Dhabi. He oversees certain legal operations across the Mubadala Group, in addition to being the General Counsel for the Petroleum & Petrochemicals platform.

During his career at Mubadala, he assumed the role of General Counsel of a number of assets within the Aerospace, Renewables & ICT platform including Masdar.

Before joining Mubadala, Nijmeh worked as a senior associate at international law firms including Allen & Overy and Simmons and Simmons.

Mr. Nijmeh sits as a board member for CEPSA, Hakkasan Limited and Mubadala Petroleum.