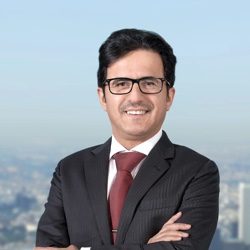 Mr. Musabbeh Al Kaabi has been a member of the Board of Directors since 2017 and became Chairman of the Board on November 13, 2018, being reelected as a Director and Chairman on October 15, 2019. He is currently CEO of Petroleum and Petrochemicals at Mubadala Investment Company, overseeing the development and management of its portfolio of oil, gas and chemical businesses. Prior to this role, he was CEO of Mubadala Petroleum, a company he joined in 2013 after spending 16 years working with Abu Dhabi National Oil Company (ADNOC), where he held a number of positions before becoming Manager of the Exploration Division. Mr. Al Kaabi has been an active member of a number of professional bodies and committees and is currently an Executive Committee member of various recently-created joint ventures in Abu Dhabi. He also serves as Chairman of the Board of Directors of both Mubadala Petroleum and NOVA Chemicals and as a Board Member of Dolphin Energy, Cosmo Energy Holdings and Borealis.

Mr. Al Kaabi holds a Bachelor's degree in Geophysical Engineering from the Colorado School of Mines (USA) and a Master's degree in Petroleum Geoscience from Imperial College, UK.

Continue reading
Turn on notifications to stay up to date