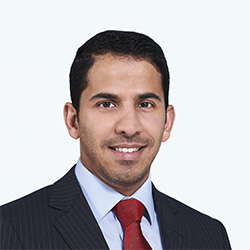 Mr. Saeed Al Mazrouei is the Deputy Chief Executive Officer of Direct Investments at Mubadala Investment Company. He was formerly Deputy Chief Financial Officer and Executive Director of Mergers and Acquisitions at Mubadala. Prior to that, Mr. Al Mazrouei was in charge of the Debt Management Office (DMO) within the Abu Dhabi Department of Finance, which he helped establish in 2009 and subsequently led its strategic direction.

At an earlier stage of his career, Mr. Al Mazrouei worked in The National Investor for two years in the field of investment banking. He is currently a board member of Aabar Investments, Borealis and Mubadala Medical Company, having previously served as a board member in Aldar Properties and Abu Dhabi Fund for Development. Mr. Al Mazrouei was a member of the Project Management Office that was responsible for the merger of government owned entities that created Mubadala Investment Company.

Mr. Al Mazrouei holds a BSc in Finance from Suffolk University (USA), an MSc in International Securities Investment and Banking from the University of Reading (UK) and an MSC in National Security and Strategic Studies from National Defense College (UAE).