Fundación Cepsa in San Roque has donated to the Food Bank of Campo de Gibraltar fuel cards for refueling of vehicles that the organization uses for the performance of its solidarity work and which had the participation of Cepsa volunteers during the Gran Recogida de Alimentos food drive last November.

The head of Fundación Cepsa in Campo de Gibraltar, Estrella Blanco, has made effective this delivery to the president of the Food Bank, José Serrano, who has stressed the great solidarity of the people of Campo de Gibraltar during this initiative. However, he has also pointed out that they are still in need of food donations, so all those who want to collaborate with the Food Bank can contact them.

This donation from Fundación Cepsa comes as part of the food drive charity campaign that was organized during the few last weeks of 2021 by the Food Banks of Spain through virtual donations and at the cash registers in collaborating supermarkets. Fundación Cepsa has once again maintained its commitment to collaborate with this initiative with fuel cards and volunteers.

Fundación Cepsa has been helping to organize the food drive campaigns run in Huelva for many years. Furthermore, two charity Food Bank projects in Campo de Gibraltar received Social Value Awards in 2009 and 2012. These awards are made annually to raise awareness of, and provide funding to, initiatives run by organizations and groups working to enhance the well-being and social inclusion of people in Campo de Gibraltar.

In 2021, Fundación Cepsa also collaborated with the Campo de Gibraltar Food Bank to offset the effects of the health crisis with a donation of seven tons of hygiene and cleaning products, in collaboration with the Persán Foundation. 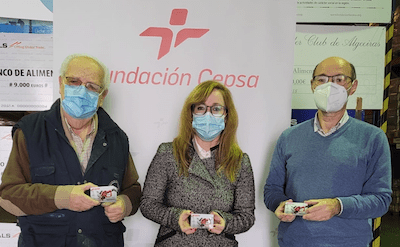