The Red Cross, CEAR Canarias, the Canary Islands Mental Health Federation, the Anchieta Association for the Social Reintegration of Minors, the Nahia Welfare Association and the Hemophilia Association in the province of Santa Cruz de Tenerife (AHETE) have been distinguished with the Fundación Cepsa's 2021 Social Value Awards, which were decided this morning in the Canary Islands. These awards are aimed at recognizing and promoting social initiatives that promote the inclusion and well-being of disadvantaged people or groups, and developing the value of solidarity among Cepsa professionals.

The six winners will share 65,000 euros in order to implement their projects over the coming year.

The Diputado del Común, Rafael Yanes, who chaired the jury, highlighted the work of the Fundación Cepsa in encouraging solidarity projects for the most vulnerable and pointed out that "this edition will benefit more than 500 people directly and more than 1,800 indirectly, through initiatives aimed at people with functional diversity, migrants, victims of gender violence, and those affected by the volcano on La Palma.

For her part, the head of Fundación Cepsa in the Canary Islands, Belén Machado, said that "the Awards represent the most important social action initiative of Fundación Cepsa, which, in addition to the economic support they provide, are very special awards: they are different from any others because they encourage solidarity within the company through the participation of Cepsa professionals, who act as solidarity sponsors, creating strong collaborative relationships".

The winners were chosen from a total of 61 candidates, based on aspects such as project management, technical and economic feasibility, the initiative’s number of direct beneficiaries, innovation, and the opportunity for active participation by Cepsa employees as volunteers.

The jury was composed of the Deputy Minister of Social Rights of the Government of the Canary Islands, Gemma Martínez; the Island Director of Social Policies of the Cabildo of Gran Canaria, Ricardo Redondas, who represented the Minister of Social Policy and Accessibility of the Cabildo of Gran Canaria, Isabel Mena; the Councilor for Citizen Participation and Diversity of the Cabildo of Tenerife, Nauzet Gugliotta; the Councilor for Social Action of Santa Cruz de Tenerife, Rosario González; the Councilor for Social Services of Las Palmas de Gran Canaria, Carmen Luz Vargas; the head of Tenerife Solidario, Beatriz Sicilia; the head of medical services of Cepsa in the Canaries, Laura Hernández, and the head of  Fundación Cepsa in the Islands, Belén Machado, who acted as secretary.

Since they were introduced in the Canary Islands in 2008, these awards, which are also held in Madrid, the province of Huelva, Campo de Gibraltar, Portugal, Colombia and Brazil, have contributed to the development, up to the 2020 edition, of 55 projects of a very diverse nature in the Islands, with 495,000 euros distributed. With the six winning projects in this edition, the total amount exceeds 550,000 euros.

The Spanish Red Cross project 'SOS La Palma' focuses on covering the needs of people who are in a situation of extreme vulnerability or social exclusion due to the eruption of the volcano, by providing basic aid to a hundred direct and 250 indirect beneficiaries. The aid will be based on providing financial assistance for the purchase of food and hygiene products, household goods, furniture, and basic household appliances. This is in addition to referral to internal and external Red Cross resources and mediation to ensure access to social, health or educational resources. In addition, the beneficiaries will be monitored to assess their progress and their full inclusion in society. The sponsor is María del Mar García.

The Spanish Commission for Refugee Aid (CEAR Canary Islands) will launch the 'Itinerary' project to support personalized insertion itineraries. Its objective is to promote the social integration of refugees, asylum seekers, displaced persons, and immigrants by facilitating access to existing public and private resources, mainly in the social, legal, health, educational, and employment areas. The project, which is expected to benefit 120 people directly and 80 indirectly, will also generate information resources on services and benefits. The initiative includes the development of initial reception actions, analysis of the situation of each user and their demands, the provision of information on specific resources, referral to internal and external services to meet the demand, in addition to providing resources and monitoring progress. The solidarity sponsor of the initiative is Amayra García.

The Canary Islands Mental Health Federation will implement the project 'In first person: volunteering and participation' to promote and encourage volunteering with this associative network. The initiative, which will benefit 84 people directly and 700 indirectly, is a step forward in that the people themselves, based on their own experience and having lived with a mental health problem, become involved in the day-to-day work of organizations or contribute their testimonies, their knowledge, and their skills in order to serve as support for other people who are experiencing similar situations. To this end, action lines will be set up with the Comité ProSalud Mental, as the representative of the group, and people with mental health problems will be recruited as volunteers. In addition, training activities will be implemented in each of the Federation's entities and a technical support area will be set up. The actions implemented also include an annual meeting and the design of a mental health awareness and prevention campaign. It is sponsored by Tanausú Cruz.

The Anchieta Association for the Social Reintegration of Minors (ARSM Anchieta) will implement the 'Voices Project', to give visibility to the victims of male violence using the tools offered by the performing arts. The initiative, which will benefit 17 people directly and 200 indirectly, includes creative research workshops with a group of women who belong to this group and are interested in sharing their personal experiences and their relationship with their surroundings in a performance experience. The project revolves around the prevention and detection of situations of inequality, submission, or mistreatment, and refers to the different forms of male violence, creating a space where they can meet and lay the foundations for their empowerment. The solidarity sponsor is Javier Calderón.

The Nahia Assistance Association will promote a 'Linguistic and Cultural Inclusion Program', aimed at creating adapted learning spaces for young migrants arriving in the Canary Islands. To this end, they will be provided with basic social language skills and will be helped to compensate for or mitigate the differences caused by socioeconomic, linguistic, and cultural inequalities, in addition to promoting the functional use of the language as an instrument of communication. The initiative, which will have 50 direct and 100 indirect beneficiaries, also includes the use of games for the development of communication in daily life and the introduction of cultural content from different countries to encourage the development of attitudes of respect and tolerance. It is sponsored by Jorge Ramos.

The Hemophilia Association of the province of Santa Cruz de Tenerife (AHETE) project 'Know my life, know my hemophilia' is designed to respond to the demand from those affected by this pathology to normalize the disease in society, through personal experience. The aim is to prevent the group from suffering situations of vulnerability and social exclusion, for which a testimonial video will be produced to publicize the lives of people suffering from hemophilia or another congenital coagulopathy, in addition to contributions from the relatives of those affected, representatives of the association itself, and health specialists. This material will be distributed among affected groups, family members, education centers, and public institutions in the social health, and education fields in order to raise awareness in society. The project, which will benefit 150 people directly and 500 indirectly, is sponsored by José Román Álvarez.

The jury also selected the initiatives 'Care Unit for Mild Cognitive Impairment', by the Association of Caregivers, Relatives and Friends of People with Dependency, Alzheimer's and other Dementias (ACUFADE), and the project 'Support for the recovery of people affected by eating disorders', of the Gull Lasègue Association for the Study and Treatment of Anorexia and Bulimia in the Canary Islands, as candidates for the Canary Islands in the category 'Special Employee Award'. This is an additional award granted by Cepsa professionals working in the countries in which the Foundation operates. It will allow a maximum of 5 projects to be awarded from among the 14 selected (two for each area) by juries in Spain (Canary Islands, Madrid, province of Huelva, and Campo de Gibraltar), Portugal, Colombia, and Brazil. The winners will share 45,000 euros. 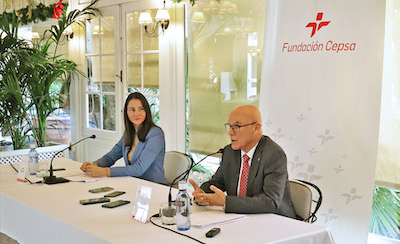