Fundación Cepsa and the Spanish Red Cross have held a meeting in La Palma to learn about the impact of the cooperation actions carried out by both entities to help those affected by the eruption of the volcano on the Isla Bonita.

During the visit, which was attended by the head of Fundación Cepsa in the Canary Islands, Belén Machado, and the Santa Cruz de Tenerife provincial coordinator of the Red Cross, Rubén González, a review was made of the actions carried out, whose financial endowment amounted to 39,000 euros.

In this regard, Red Cross technicians commented in detail on the aid provided through the SOS La Palma initiative, awarded in the last edition of the Fundación Cepsa's Social Value Awards, focused on covering the basic needs of those affected by the eruption. At the same time, they emphasized another of the actions developed jointly after the volcanic eruption, with the activation of a psychosocial support service to help the victims to cope with the difficult situation from the outset and contribute to improving their mental and emotional state.

Belén Machado emphasized during the visit that "the support of Fundación Cepsa to the people of La Palma has been twofold, since in addition to helping to cover basic needs, it has gone further, with the provision of long-term care through the psychosocial support service managed by the Red Cross, which has contributed to the emotional well-being of those affected, as important as that aspect is.”

She also highlighted the well-known solvency of the Red Cross to provide an immediate response to social emergencies of any kind. "Once again, the entity stood out for its quick action and for having the capacity to react immediately and to not only help, but also channel aid from the population and other entities interested in contributing," she emphasized.

For his part, Rubén González pointed out that with this cooperation, Fundación Cepsa has demonstrated its commitment to the most vulnerable groups, prioritizing an emergency situation such as that experienced by part of the population of La Palma hit by the eruption.”

In addition, he pointed out that "At the Spanish Red Cross, we work to reduce the consequences of the effects caused by disasters, with the aim of stabilizing the situation quickly, enabling people to rebuild their lives as soon as possible. To this end, solidarity from the business world is also a crucial aspect," and he called on companies and institutions to "maintain this solidarity over time, since the economic and emotional consequences of the eruption are not yet over.”

Fundación Cepsa and the Red Cross went hand in hand from the first moments of the eruption with the implementation of a psychosocial support service for those affected by a particularly difficult situation, marked by the loss of their home and in many cases, their livelihood.

In this case, the focus was not only on alleviating social needs in the emergency phase, but also on making progress towards the stabilization and recovery of people who suffered significant losses, contributing to the improvement of their mental and emotional state.

To this end, the most vulnerable population with the most urgent needs was identified and their individual needs were assessed and addressed. In addition, referrals to internal and external Red Cross resources, mediation to ensure access to social, health and educational resources of the cohabitation unit, as well as monitoring of the people assisted to assess their evolution and full inclusion in society.

Likewise, and thanks to the SOS La Palma project, winner of a Social Value Award in the 2021 edition, patronized by Cepsa professional María del Mar García, a total of 117 families were able to cover part of their basic needs through cards for food purchases in supermarkets, as well as financial aid for household goods and basic household appliances. 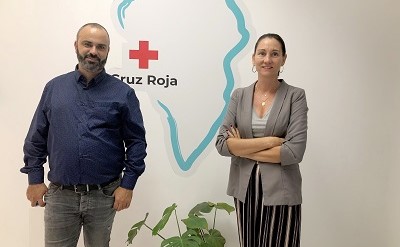