This month, the Madrevieja Environmental Station reached the figure of 10,392 visitors since its opening in 2014, thanks to the educational and environmental awareness initiatives promoted first by Cepsa and now by the Fundación.

In 2009, Cepsa decided to recover and restore this nature reserve as part of its policy on biodiversity, sustainability, and support and respect for the environment, with a view to promoting environmental research. The site also serves as a space for education and is open to the public. Thirteen years after the project was launched, this initiative now led by Fundación Cepsa as a pioneer in the province of Cadiz has grown with the inclusion of new biodiversity projects such as the recovery of the barn owl in southern Spain with the collaboration of the Junta de Andalucía and the European Union, through which more than 50 specimens of barn owls have already been released in southern Spain since 2019.

Fundación Cepsa, in collaboration with Ornitour, the company that manages the space, carries out environmental education initiatives throughout the year at the Madrevieja Environmental Station, such as the Wetlands Conference, Energy Campus, and Open Doors, which are for students and the general public, in addition to other organized visits.

The head of Fundación Cepsa, Estrella Blanco, has emphasized "the work done year after year to maintain this space as another green lung of Campo de Gibraltar and also to be a center for research and monitoring of species, and a key place for environmental education in our region."

The richness and diversity of its habitats have made the Madrevieja Environmental Station a true sanctuary for around 130 cataloged species of birds and 21 mammals. Significant amounts of banding activities are also carried out, as well as other actions to inventory moths and butterflies, other animals that are very present in this natural enclave. 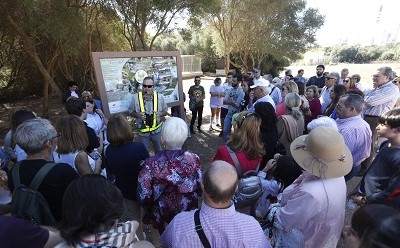