The awarded organizations will share a total of 65,000 euros to carry out projects over the next year, benefiting about 9,500 people directly in the archipelago while indirectly reaching about 37,000.
Rafael Yanes, president of the jury, highlighted the solidarity of Fundación Cepsa with the most vulnerable people of the islands. He added that “promoting solidarity work at this time is fundamental because of the support it represents to the third sector, without which the state of well-being does not exist.” He also stressed the relevance of the projects that have competed in this edition, behind which, he said, people and families are living in complex situations and will benefit from the support of these awards.

The head of the Fundación Cepsa in the Canary Islands, Belén Machado, noted that the Social Value Awards “have a long history and are a leader in social issues, helping to facilitate the implementation of projects for the most vulnerable groups, while at the same time representing a commitment to progress towards a society based on integration and equal opportunities.” She also highlighted its solidarity nature, evident through the voluntary support provided by Cepsa’s professionals to the different projects, with the role of a sponsor, which generates important bonds of collaboration.

The winners were selected, from a total of 43 proposals submitted, by a jury made up of the Council Deputy, Rafael Yanes; the Deputy Minister of Social Rights of the Government of the Canary Islands, Gemma Martínez; the Delegate Councilor of Citizen Participation and Diversity of the Cabildo of Tenerife, Nauzet Gugliotta; the Councilor of Social Policy and Accessibility of the Cabildo of Gran Canaria, Isabel Mena; the councilor for Social Action of Santa Cruz de Tenerife, Rosario González; the delegate councilor for Social Services of Las Palmas de Gran Canaria, Carmen Vargas; the head of the Tenerife Isla Solidaria Program of the Social Action Department of the Cabildo de Tenerife, Beatriz Sicilia; the head of the Economic and Financial Department of Cepsa in the Canary Islands, Natalia Domínguez, and the head of Fundación Cepsa in the Islands, Belén Machado, who acted as secretary.

Since its first year in the Canary Islands in 2005, the Social Value Awards have granted a total of 640,000 euros to carry out 68 social projects in the Islands, including the projects selected today.

The ‘AMAR-T’ project carried out by the Adepsi Association aims to train people with disabilities in the performing arts to make them part of an integrated cultural festival of the living arts. To this end, a theater workshop will be created to train them in this subject, as well as a workshop on communication and social networks so that they can disseminate what they have learned. This action not only promotes the adaptation of people with disabilities assisted at Adepsi to everyday life and inclusive communication, but also enhances talent, supporting them in the promotion of verbal and non-verbal expression. The project, whose solidarity sponsor is Luis Barrios, will benefit 33 people directly and 70 indirectly.

The project ‘Te puede pasar,’ by the Asociación para el Estudio de la Lesión Medular Espinal (Aesleme), is focused on saving lives by changing attitudes towards safe, responsible, and healthy transportation values of young people in the Canary Islands through free lectures given by a spinal cord injury victim, previously trained both in road safety and trainer education by the association’s experts. It is structured in three phases, the first of which offers free psychological and legal assistance, while the second provides training in road safety and trainer education. The last step focuses on integrating the participants into the trainer team. The project will benefit 8,900 people directly and 35,600 indirectly. Its solidarity sponsor is José Manuel Fernández-Sabugo.

AFES Salud Mental, with its project ‘Intercambios de Ida y Vuelta,’ is committed to promoting the process of recovery and social integration of people with mental health problems by practicing craftsmanship and consolidating the work methodology of its brand ‘Intercambios de Ida y Vuelta’ of high-quality and sustainable products. To this end, there will be exchanges of experiences in artisanal craft practice and mental health awareness and specialized training in artisanal innovation will be offered to participants with mental health problems and professionals. The project will benefit 150 people directly and 300 indirectly and has Nauzet González as its solidarity sponsor.

The Asociación Canaria del Trastorno del Espectro del Autismo (Apanate) will implement the ‘Programa Respiro familiar,’ to meet the needs for rest of family caregivers of people diagnosed with ASD in a situation of social or economic vulnerability to improve the quality of life of both those affected and their families. The initiative includes four weekend retreats in which 16 people with ASD will be accompanied and supported by caregivers, with a two-day stay in an accessible hotel, while their family members have that time off. It will benefit 16 people directly and 32 indirectly. José María Pérez is the sponsor of this initiative.

The Federación de Asociaciones de Personas Sordas de las Islas Canarias (Fasican) will undertake the project ‘SVils FASICAN,’ focused on implementing an innovative service that makes video interpretation available to deaf people remotely, enabling them to access face-to-face services of both the public administration and private entities, guaranteeing them equal opportunities and personal autonomy in their daily lives. The initiative, which will have 200 direct beneficiaries and 350 indirect beneficiaries from all the islands, will be supported by hiring a sign language interpreter. It is sponsored by Gonzalo Foronda.

The Asociación Gull Lasègue para el Estudio y el Tratamiento de la Anorexia y la Bulimia en Canarias (GullONG) will promote the improved quality of life of people with eating disorders through the project ‘Energía Terapéutica: apoyo a personas afectadas por TCA.’ The initiative focuses on comprehensive and multidisciplinary care for this group, which has increased following the pandemic. To this end, both psychosocial care and meetings of those affected are included to attend to their needs. Simultaneously, work will be done to support family members. The initiative will reach 126 people directly and 600 indirectly. The procet’s solidarity sponsor is Antonio Ballester.

The jury has also selected the initiatives ‘Por una movilidad más segura,’ of the Asociación de Discapacitados del Sur (ADISSUR), and the project ''EMejórate: plan terapéutico de intervención en personas con esclerosis multiple,’ of the Asociación Social Pichón Trail Project (PTP), as candidates for the Canary Islands in the category 'Special Employee Award.’ This is an additional award granted by Cepsa professionals working in the countries in which the Foundation operates. It will allow a maximum of 5 projects to be awarded from among the 12 selected (two for each area) by juries in Spain (Canary Islands, Madrid, province of Huelva, and Campo de Gibraltar), Portugal, and Colombia. The winners will share 45,000 euros. 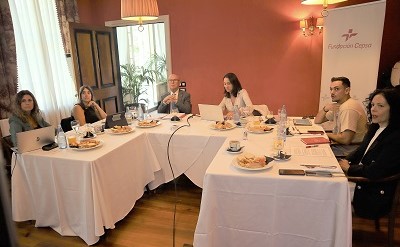