The Cepsa, La Caixa, Reina Sofía, and Jesús Serra Foundations have joined together to purchase a large isothermal truck that will enable the Tenerife Food Bank to collect perishable goods for the most vulnerable groups.

Thanks to this donation, surpluses from the food sector, donated by manufacturers, supermarkets, and distributors on the Island, can be collected for transfer to the Food Bank's warehouse located in the capital of Tenerife, where the 122 entities in charge of direct distribution to the neediest families and centers in need go.

This will fill a gap that has been dragging on for months, after the company was forced to withdraw the isothermal truck with which it has been providing the service for the previous thirteen years due to obsolescence.

Use of the new vehicle, purchased through the solidarity of the four aforementioned foundations, has been delayed due to the accumulated delay in its manufacture, as a result of the shortage of electronic components worldwide.

At the meeting to present the vehicle, the president of the Food Bank of Tenerife, Hernán Cerón, and its vice-president, Javier Krawietz, were accompanied by the Councilor for Social Services of the Santa Cruz City Council and the president of IMAS, Rosario González; the head of Fundación Cepsa in the Canary Islands, Belén Machado; the director of the Business Area of Caixabank, Jesús Carlos Álvarez; and Pía Serra, representing the Jesús Serra Foundation.

Hernán Cerón highlighted the rapid response of the four foundations that collaborated in the purchase, “without whose help, it would not have been possible.” In turn, he stated that this response “confirms, once again, their solidarity and generosity with the needy families of our province.”

The new isothermal vehicle, which has a capacity of 5,800 kilos, is an important aid for the Food Bank to carry out its work, especially when collecting surpluses of perishable food, although it will also be used at specific times for the distribution of food from the FEAD Plan (Fund for European Aid to the Most Deprived).

The Tenerife Food Bank distributed a total of 2,370,000 kilos of food in 2021, of which 522,000 kilos was perishable, a figure they hope to increase thanks to the addition of the new isothermal truck. 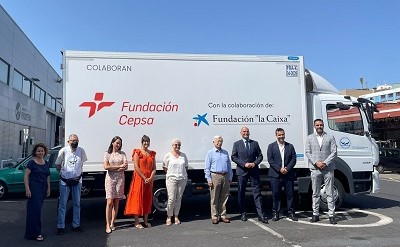