Fundación Cepsa and the Asociación Asperger TEA Islas Canarias (AsperCan) present two awareness guides for true adaptation of people with Autism Spectrum Disorder (ASD) in the areas of education and business. The initiative, developed by AsperCan users, is a pioneer on the Canary Islands. For the first time, it is the group itself that has led the development of material of this kind.

Along this line, a total of 30 adults with ASD (which includes Asperger syndrome) associated with AsperCan in Gran Canaria, Lanzarote and Tenerife, have been in charge, with the support of the association’s technical team, of the process of searching for, selecting and drafting the contents, as well as developing illustrations and the layout of the publications. This action is part of the project 'ReseTEA: Autistic Activism and Self-Representation', which was recognized last year at Fundación Cepsa's Social Value Awards.

The two guides, both the one for teachers and the one for the workplace, are based on the personal experiences of the participants who, from their own experience, have tried to create a resource with best practices. This has meant that, in many cases, they have carried out a simulation exercise of how they would have benefited if they had had these tools in the classroom or at their workplace.

The head of Fundación Cepsa in the Canary Islands, Belén Machado, emphasizes that both publications aim to "highlight a group that has little visibility in society, while at the same time representing a step forward in the construction of inclusive environments both in educational centers and in the business world. This is an action that empowers people with ASD by leading it from a first-person perspective."

'ReseTEA' Project Coordinator and AsperCan Technician María del Mar Álvarez, meanwhile, says that "the awareness guides represent an advance in attention to neurodiversity and, therefore, a success not only for the AsperCan community, but for any person, as all measures adopted are collectively beneficial."

The idea for these two publications arose from the proposal by the group of adults with ASD who make up AsperCan, who detected, during the pandemic lockdown, an absence on the Canary Islands of projects led and self-managed by people with autism, and the need to share information from a first-person perspective.

Until now, the existing best practices material has been developed by professionals. This opens up a new field, which allows for a more realistic vision of the deficiencies detected by people with autism, to better meet their needs, as they themselves are the ones who express the way in which they can be helped.

In the case of the guide on inclusive school environments, the emphasis is placed on best practices linked to the activity of the education centers themselves, which facilitate daily life in the different educational stages, delving into aspects ranging from the classroom space, to the activities conducted in them, group work, educational support, the evaluation process, or homework. It also includes tips and ideas for classroom changes, the cafeteria or recreational spaces. And there is also an emphasis on preventing bullying.

The guide for companies, meanwhile, includes guidelines for achieving inclusive spaces, ranging from adapting the workplace to aspects to be taken into account in the job interview or the trial period. This is in addition to the necessary support in organization and time management, in team meetings or in relations with colleagues, among others.

Both publications can be downloaded free of charge from the Association's website: www.aspercan.com. In addition, during the second half of this month, they will be sent by e-mail to pre-school, primary and secondary education centers throughout the Canary Islands, as well as to the island business network.

The publication of these guides culminates the activities of the 'ReseTEA' project, which has also included awareness-raising talks in the area of education and business and generational exchange actions within AsperCan to highlight the possibilities of social projection for people with ASD. 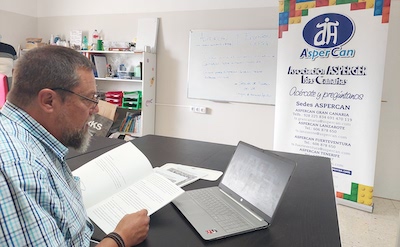