This Tuesday, the Mora Claros Palace witnessed the important solidarity activity that takes place in the province of Huelva through Fundación Cepsa's Social Value Awards. These awards, which, in the words of the delegate of Equality, Social Policies and Conciliation, Manuel Antonio Conde, "have become a bastion of solidarity," are a classic must in the agenda of entities working to help the most disadvantaged citizens or those at risk of exclusion.

Children in child protection centers, teenagers, gamblers in rehabilitation, those affected by the psychological consequences of the pandemic, immigrants, people with intellectual disabilities and cancer patients. These are the fields of work of the projects presented by the awarded associations and solidarity organizations. Representatives from the city councils of Huelva and Palos de la Frontera, as well as from the Junta de Andalucía met first-hand the people behind the actions that Cepsa supports with a total of 89,000 euros in Huelva.

The prizes were collected by representatives of the winners. Two of them were chosen by vote by the more than ten thousand Cepsa employees around the world, and both went to projects in Huelva; specifically the project presented by the Adult Life Association of People with Intellectual Disabilities (AVADI), called "Support program for families of people with intellectual disabilities," and the Spanish Association against Cancer in Huelva, awarded for its project "Home-help service-specialized, urgent intervention for cancer patients in palliative care." Andrés Balbás and Gloria Puy, presidents of both entities, collected the awards accompanied by their sponsors, Luis Santiago Parra and José Antonio Martínez Villa.

The jury's awards, which highlighted their excellence and the seriousness of all the projects in the competition, were given to:

AONUJER, which supports gamblers in rehabilitation and works to prevent gambling addiction in young people and adolescents, is planning a therapeutic park to support its work. The award was collected by its president, Jorge Barroso, accompanied by Mariano Solís, a Cepsa employee who sponsored the project.

CRECER CON FUTURO and its program of collaborating families, which aims to change the fate of children living in child protection centers thanks to the involvement of collaborating families who want to participate in their care, taking them in on weekends and vacations, and offering the possibility of creating a positive family model for their future.

CAMINAR, which is dedicated to the social and labor insertion of women in conditions of equality, and its post-Covid integral health project to reduce the consequences of the psychophysiological discomfort produced by the pandemic. Inmaculada Gallardo, president of CAMINAR was accompanied by Eduardo García, her solidarity sponsor at Cepsa.

ASITES Teléfono de la Esperanza, for its project "Psychoeducational intervention with adolescents and families in the province of Huelva," which aims to support adolescents in their personal and social maturation process. President Luis Benítez Ferrero collected the award for the project sponsored by Igor Casimiro-Soriguer.

FECONS, North-South cooperation, will be able to rebuild the damage suffered by its facilities in Lepe due to the storm last September, which they left without the necessary support to the people in vulnerable situations it sheltered. Raquel Muiño and Marius Nsadap represented the charity, and were accompanied by Cepsa's godmother, Milagros García, during the collection of the award.

The jury of the awards, formed by Alfonso Aramburu, Luciano Gómez, José Antonio Nielsen-Hidalgo, Teresa Pulido, Jesús Velasco and Manuel Antonio Conde, highlighted the seriousness and brilliance of the projects that the Fundación Cepsa will support in the coming months.

The event was closed by the territorial delegate of Equality, Social Policies and Work-Life Balance, Manuel Antonio Conde del Río, member of the jury, who stated that "these awards have become a bastion of solidarity, a guarantee to recognize and promote social initiatives that favor the inclusion and welfare of those groups or less favored people. Undoubtedly, the Cepsa Social Value Awards are essential to continue to visualize initiatives, people and entities that watch over the welfare of people. Belonging to this jury, after our counselor Rocío Ruiz in the previous edition, is a responsibility that I have assumed with the commitment that, from the Department of Equality, Social Policies and Conciliation, we have with the citizenry."

Fundación Cepsa sent a message to all the people and entities that carry out social and solidarity work in Huelva to present their projects for the 2022 edition, since, in the words of Jesús Velasco, head of the foundation in Andalusia and the Canary Islands, "it is in the DNA of Cepsa and all its professionals in Huelva to have been an active part of our society for 18 years and to support the brave people who seek the common good in Huelva."
Continue reading 2 min 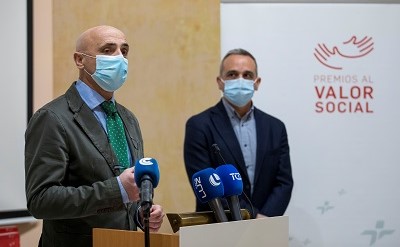