There is life beyond the scrapyard — cars can also be recycled

European regulations require that 95% of the vehicle must be reused

More than 4,000 parts go into making a vehicle that also carries fuel, oils and other liquids inside. A modern car can be assembled with almost fifty different materials ranging from glass to rubber on tires or plastics on bumpers.

This is how up to 60,000 joints end up in the scrapyard after 18 years, which is the average age of the vehicle fleet in Spain. An end of a journey with thousands of kilometers traveled on national roads and highways, but which, by law, must not end in the ‘graveyard’ for cars.

Since 2015, European legislation has made it mandatory to recycle 95% of the total mass of the end-of-life vehicle. “We still receive plastics that are very difficult to recycle, which is why we fail to reach 100%,” explains Alicia García-Franco, general manager of the Spanish Federation of Recovery and Recycling (FER - Federación Española de la Recuperación y el Reciclaje). “Although, manufacturers are increasingly investing in better plastics, and it will become possible to reuse everything in the coming years,” she adds.

In Spain, nearly 700,000 vehicles are recycled in more than 1,300 Authorized Treatment Centers (ATC)

“Some 700,000 vehicles are recycled,” says García-Franco, which arrive at the Authorized Treatment Centers (ATC), also known as scrapyards. It is at these facilities where the ‘reincarnation’ of automobiles into new cars, washing machines, shopping carts, swings, or asphalt, begins.

From scrapping to a new life

Spain has nearly 1,300 ATC, but these are not the only final destination for end-of-life cars; there are also large hypermarkets for the nearly 4,000 parts that make up these vehicles. Before being turned into scrap, headlamps, alternators, EGR valves, front ends, or starter motors, they are stored to be sold independently to users who need them.

However, before being taken apart or directly crushed, “every vehicle that arrives at these facilities has to be decontaminated,” stresses the FER’s general manager. After verifying that the car has been deregistered with the Spanish Directorate General of Traffic and that all administrative formalities are in place, the scrapyard workers remove any elements or liquids that could damage the environment. “In this case, we are talking about oils, gasoline, or even the battery,” says García-Franco.

Once separated, these fluids are taken to separate tanks to analyze their impurities. If they cannot be reused, they are discarded; otherwise, they can be given a second life as new fuels or lubricating oils for engines or gearboxes. 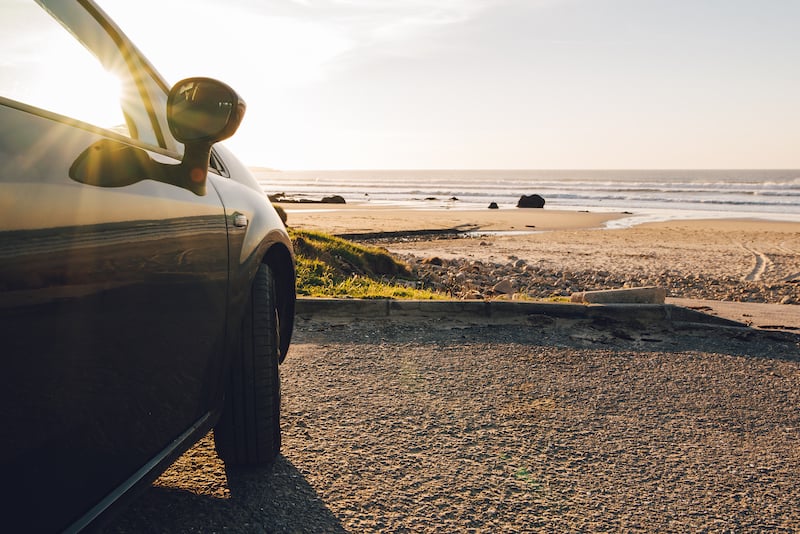 Next comes the actual disassembly of the more than 4,000 parts in the vehicle: engine, hood, wheels, headlights, mirrors, doors, all of them are stored for later “utilization, repair, or reuse,” she reveals. This leaves the metal skeleton of the vehicle practically bare for crushing.

It is in these machines that the car is reduced to a metal cube or “sold to a shredding facility,” García-Franco continues. In these facilities, the body of the car that has not been dismantled is shredded. “To give you an idea, it’s a giant grinder that shreds everything.”

Inside this huge, “fully mechanized” shredder, the metal components are separated from the rest by magnets. “Seventy percent of a car is ferrous material,” stresses the FER's general manager. The rest of the materials such as copper, bronze or aluminum, “usually around 5%,” are also destined for other smelters.

If car tires cannot be reused, they become artificial grass or fuel for industrial plants

Modern cars are becoming more and more technological, and the wiring inside them is hundreds of meters long and weighs up to 10 kilograms. “They are reused to make new cables, bicycles, or back into cars,” narrates García-Franco.

Tires, on the other hand, are the easiest to repurpose. If their condition permits, they can be reused. However, if they are damaged, they are shredded to become a granulate with multiple applications: from being used as fuel for industrial plants, such as cement or steel mills, to the manufacture of artificial turf.

Despite their dismantling on arrival at the Authorized Treatment Centers, “the cars have a lot of plastics in them, and recycling is not yet possible.” Plastics, along with textiles, are the most difficult to find a second life for, but when they can be reused, they become insulators or return to the automotive world as interior lining. “Manufacturers have invested heavily and are now making polymer-only plastics to facilitate recycling,” says García-Franco.

The R&D&I laboratories of major automotive firms are working to become greener and leave less of a footprint on the environment. For example, brands such as Audi, Renault, Fiat and Ford reuse plastic bottles to make floor mats. In addition, since 2020, Ford has been working with McDonald's to reuse the fast food giant's coffee waste to be used in the headlight casings of its vehicles.

The ‘problem’ with electric cars

A total of 27,769 electric vehicles were sold in Spain last year, 37.76% more than in 2020. While the rise has been sustained over time, it raises doubts: can these cars be recycled?

“The process is the same, only an electric battery has to be removed,” explains Alicia García-Franco, general manager of the Spanish Federation of Recovery and Recycling (FER - Federación Española de la Recuperación y el Reciclaje). “Right now, we send them outside Spain, but we have two research projects to recycle them here,” he adds.

The most common batteries are lithium-ion batteries, which are composed of lithium, nickel, cobalt, and manganese. “In addition, they have a structure made of aluminum and other metals,” García-Franco adds.

Due to their recent incorporation in the automotive market, “there is still time for their reuse or recycling,” explains the FER's general manager. The possibilities under consideration by the industry are myriad, but “they can be used to recharge various things such as wind turbines.”