More than 80% of international trade in goods is by sea, so advances in sustainability for this sector are critical to the success of the energy transition

The fight against climate change affects every country and industry, and shipping is no exception. With big ambitions for 2050, such as halving the greenhouse gas emissions of 2018, technology will have to be an ally in increasing this sector's efficiency. Additionally, zero or very low emission fuels (such as e-methanol, green ammonia, and advanced biofuels) are becoming very important due to their capacity to reduce the emission of these gases. Although they are still under development, some of them are now a reality.

But to fully understand the sector's role in this battle, first we must consider a small cross-section of its volume. More than 80% of international trade in goods is by sea. In other words, most of what we consume from outside our borders does not arrive by land or air. During the pandemic, we did not suffer from supply shortages in part because container trade, gas transport, and bulk commodities (both dry cargo and liquids) were not particularly affected by the ravages of the coronavirus, according to the latest United Nations report. We have noticed this, however, with the recent materials crisis: the exorbitant price of containers, especially those from China, and gas, in addition to the shortage of containers due to a lack of steel, pallets, and other resources, have all changed the maritime logistics flows from top to bottom.

So how can a sector responsible for supplying an entire planet help in the green transition? In terms of emissions of greenhouse gases—carbon dioxide, methane, and nitrous oxide— maritime transit, which includes international and domestic, increased from 977 million tons in 2012 to 1076 million in 2018, an increase of 9.6%, according to figures reported in the IMO's (International Maritime Organization) Fourth Greenhouse Gas Study 2020. Given these figures, the agency has set a target reduction of at least 50% by 2050 compared to 2018 levels.

To achieve this, the UN stresses the need for smart, resilient, and sustainable maritime transport. "For the energy sector, shipping is not only a large-scale user, but also a very important transporter, so the industry will have to respond to declining demand for tankers and coal tankers and increasing demand for ships capable of carrying hydrogen, ammonia, and other alternative fuels," the UN report noted.

For the European Commission, it is one of the most energy-efficient means of transport, but also a major and growing source of greenhouse gas emissions.

If we look at our continent, for the European Commission, it is one of the most energy-efficient means of transport, but also a major and growing source of greenhouse gas emissions. As already indicated by the IMO, the Commission's forecasts reflect a 90-130% increase in emissions by 2050, using 2008 as a reference year, under a range of plausible long-term economic and energy scenarios. 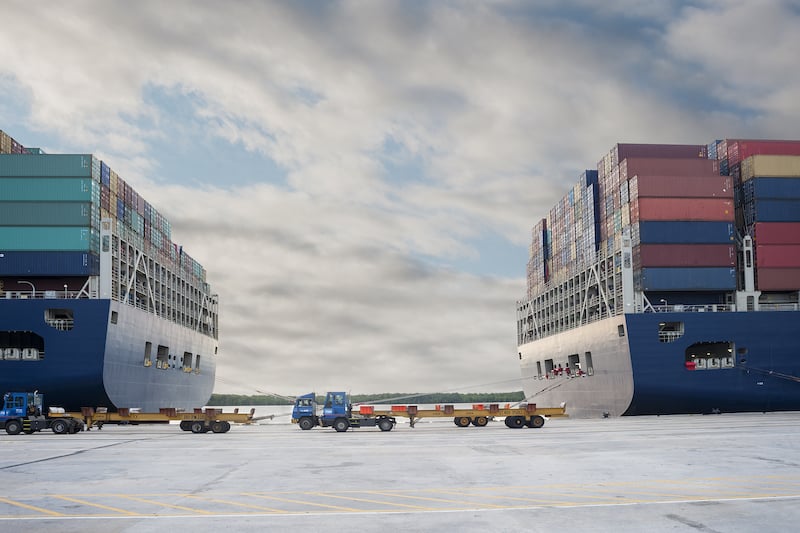 In this scenario, the EU, in line with international organizations and as part of the Green Deal, intends to boost the demand for renewable, low-carbon-footprint maritime fuels, establishing a maximum limit on the content of these harmful gases for ships calling at European ports; in addition to promoting zero emissions technology at berth (when ships remain in ports).

The goal: the energy transition

The industry seems to have begun to take its first steps. IMO 2020 placed a global limit on sulfur content in marine fuels, mandating a reduction to 0.5% (prior to this regulation it was 3.5%). With this initiative, the organization estimates "a 77% reduction in total emissions produced by ships, equivalent to an annual reduction of approximately 8.5 million metric tons of sulfur oxides."

However, in order to achieve this long-awaited energy transition, the agency itself stresses that this process "will require new technologies, infrastructure, and fuels to support low or zero-carbon transport as it still relies heavily on fossil fuels." Green hydrogen, synthetic fuels, and "efuels," produced from renewable hydrogen and CO2 removed from the atmosphere, and second-generation (2G) biofuels made from waste (agricultural, forestry, used oils, etc.), such as biodiesel (FAME) and hydrobiodiesel (HVO), are the best alternatives. Not to mention ammonia and methanol, some of which are in use, but are still a minority.

In fact, there are currently initiatives such as those by Maersk, the world's leading ocean freight shipping company, which is building the first container ship to run on e-methanol. The Norwegian shipping company Hurtigruten, which specializes in cruise ships, is building several hybrid ships that will run on a combination of biogas, electric power, and liquefied natural gas (LNG). Cepsa, for its part, has successfully carried out the first test in Spain of advanced biofuels (2G) in one of the ships used by the company, the Montestena, owned by Ibaizabal, over several weeks at sea. The fuel has been produced from used oils (ISCC certified sustainable origin) and very low sulfur fuel (VLSFO). The use of this energy source can reduce CO2 emissions in the entire life cycle—from fuel production to use on board the ship—by up to 85% compared to the use of conventional fuels.

Ultimately, the energy transition relies on collaboration and cooperation among many stakeholders, including shore-side energy providers and port operators, as well as major investments. It will also require innovation, in relation to technological needs, new forms of operation, cooperation, and financing.

End consumers are not outside the process either. As stated by the MAMLa Network, it will become a driver of the green economy by showing a tendency to pay more for products and services with a green value chain: "This has generated an attractive business model for the maritime industry that has promoted the inclusion of certifications and green labels by new players such as carriers, ports, channels, logistics operators, and cargo owners." These are a good way to attract and promote more sustainable trade, since they generate a positive impact in qualitative and quantitative terms for those applying them as part of their organizational strategies.