The electric microcar is here: advantages and available models

Small vehicles are emerging as an alternative to solve pollution and traffic problems in large cities. In the first three months of 2022, registrations grew 182% compared to the same period of the previous year.

They measure less than three meters long, cannot reach high speeds, and carry a maximum of two people. While it may seem surprising, microcars—a kind of mix between a motorcycle and a sedan—have been with us since the post-war period. The difference is that, now, most of them no longer emit CO2 thanks to their electric motors.

Who would have thought 75 years ago that what began as a kind of shortcut for manufacturing vehicles at reduced prices in times of extreme poverty, would end up becoming part of the formula to solve traffic problems in big cities: congestion, pollution, noise, accidents, etc. For the past couple of years, cities like Madrid and Barcelona have already taken major steps in the fight against these problems, implementing low emission zones, expanding pedestrian areas or bike lanes, and pushing the city towards new models of sustainable mobility with the arrival of carpooling and carsharing, among other solutions.

Consequently, the role of microcars is growing in carsharing companies such as ShareNow. It is increasingly common to pass by a microcar when strolling the streets of Madrid or Barcelona; the surprising thing is that with just a cell phone and a simple application, you can grab it, drive to your destination, and park it on any corner of either capital, paying a fixed amount per kilometer traveled. This trend represents an open door to a future where cities will be stocked with these vehicles, taking advantage of their reduced size to streamline transportation.

When we hear mention of two-seater cars, we often think of light quadricycles, which reach a maximum speed of 45 km/h and only require a category AM driving license. Technically they are not cars, unlike other vehicles found on the market that have the same appearance yet reach higher speeds. As such, they would not fit into this category.

There is hardly any concrete sales data for the latter, but there is for quadricycles. During 2021, 946 units were registered, 420% more than the previous year, when there were 182. And this year the momentum shows no signs of slowing down; the first three months of the year already saw 274 registrations, 182% more than in the same period of the previous year (at the close of March 2021, 97 quadricycles had been registered), according to data from the National Association of Two-Wheeler Industry Companies (Anesdor - Asociación Nacional de Empresas del Sector de Dos Ruedas). "We find ourselves immersed in a process of mobility transformation, and, against this backdrop, smaller vehicles and electric vehicles are growing in popularity. Microcars are finding their niche, and we are likely to see more and more brands entering this segment," says José María Riaño, Secretary General of the Association.

What exactly are the practical advantages of electric microcars? Importantly, because these vehicles are so small, operators can use them for short journeys with ease. They do not require large parking spaces, which is greatly appreciated in large cities.

What is more, maintenance costs are lower. Since these electric cars do not have a traditional gearbox engine, breakdowns are fewer and farther between; there are few elements that can wear out. Maintenance work won’t involve replacing filters, for example, but rather a periodic check-up on the battery and electric engine. Tax advantages are also on the table. In fact, tax payments are lower.

Sustainability is another selling point. Electric microcars boast no fuel consumption and zero emissions. Operators can charge one for an approximate cost of three euros every 100 kilometers. And the good news is that city-wide charging networks continue to grow. Earlier this year, Endesa X and Cepsa announced an agreement to deploy the largest ultrafast charging network in Spain and Portugal, and the energy company offers a map that operators can use to find all the company's service stations with charging points available in Spain. In this sense, Tania Puche, Communications Director of the Spanish National Association of Vehicle Dealers (Ganvam - Asociación Nacional de Vendedores de Vehículos), believes that sales will continue to grow, because in addition to meeting all anti-pollution protocols, they are a “more stable solution than a moped, with a structure that protects the operator from direct blows. They also have a relatively affordable purchase price, which is made even more attractive thanks to ‘Moves’ subsidies." 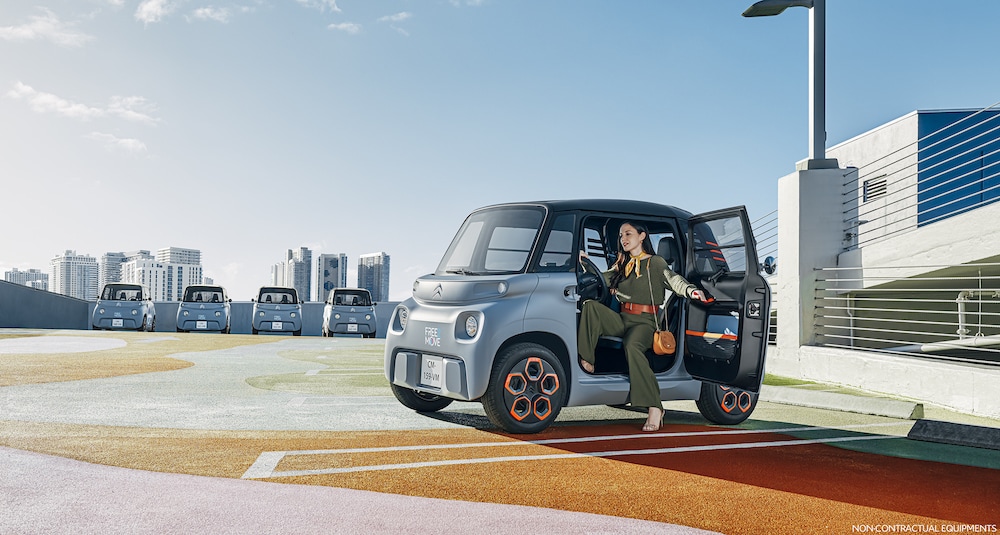 Models on the market

Major brands such as Toyota and Citroën have already opted for these smaller vehicles with electric engines to simultaneously contribute to solving the impact of pollution and congestion in cities. Here are some of the models available on the market:

Electric, tiny, and designed for city driving only. This teensy car is manufactured by the Swiss company Micro Mobility Systems. It can reach up to 90 km/h. It has a range of 200 kilometers and can be fully charged in about four hours. It measures only 2.4 meters and has two seats inside. It also has a small trunk that can hold the equivalent of a couple of cases of drinks.

Two seats and only 2.5 meters in length. Manufactured by the Japanese brand, this car is also fully electric and reaches up to 60 km/h. It can travel a maximum of 150 kilometers on a single charge. When charged using a household plug, the battery is ready in about ten hours.

This is Citroën's first 100% electric microcar. Its features are similar to the previous models, but with one important difference: it is a quadricycle that reaches, at most, 45 km/h. Since it is not technically a car, it cannot drive on highways or freeways, however operators at least 15 years of age can drive it with a category AM driver's license. In this case, the vehicle has a range of up to 70 kilometers.

While these are some of the most noteworthy models, there are other electric microcars on the market, such as the Aixam City and the Casalini M20, and even convertibles, such as the Bellier B8. All have a series of common characteristics: small, sustainable, and ideal for driving around the most densely populated metropolitan areas.