What are my options for charging my electric car?

We review what types of electric vehicle chargers are currently available, how they work and which ones are suitable for the reality of drivers

The climate crisis is a reality that is causing a change in our consumption habits. With renewable electricity production as one of the main drivers of the energy transition, the electric car is emerging as a real and sustainable alternative. It is true that the level of autonomy offered by traditional vehicles has not yet been reached, but given the development of the sector in the last decade— in 2021, sales of electric vehicles reached 6.6 million sold, representing 9% of global sales, compared to 4.1% in 2020 —they are likely to be the majority on our streets in the coming decades. But what are the benefits of this type of transport compared to combustion vehicles?

Imagine breathing (more) clean air despite the traffic or going out into the street and hearing only the voices of children playing and people talking. This could be a city—or any town, for that matter—where only electric vehicles circulate. The same ones that, during use, do not emit CO2 or any other pollutant. According to a report prepared by the European Federation for Transport and Environment, an electric car would emit 67% less carbon dioxide than a similar model using fossil fuels. But not only that: as they do not emit noise or vibrations, they are more efficient and more pleasant to live with. And, as if that were not enough, in most cities they can be parked free of charge on public roads. In addition, they are not affected by traffic restrictions in low-emission zones.

An electric vehicle has zero emissions during use, which makes them perfect for driving in cities

But not everything is a bed of roses in this new electrified world that drivers are beginning to discover. While the electric car opens up a whole “highway” of opportunities to take care of the environment and stay behind the wheel, there is a bump in the road that we should address. In fact, it is already underway: one of the big questions that users keep asking is about charging points. Because when it comes to charging the battery of electric cars, it has not always been easy to find somewhere to do it. Fortunately, more and more charging points are becoming available, especially in large cities. And their number is growing steadily, both in public spaces and in private homes.

Although different alternatives are still being researched and developed, today there are several types of charging points for electric vehicles depending on the characteristics of the vehicle and the needs we have. "Electric vehicles are already a reality, and recharging them is not a problem because there are options that adapt to your lifestyle instead of forcing you to adapt your life to electric mobility," says David García Mencera, head of New Mobility Business Development at Cepsa. Charging at the destination is the main modality today: it is mainly done at home or at the workplace. It is a slow charge, at low voltage, which allows the battery to be fully charged in about 8 hours. Wall chargers or wallbox chargers are used for this type of charging.

Charging with dynamic power control, on the other hand, consists of a sensor that is built into the charging point, mainly designed for charging from a home's electricity grid. It is intended to balance vehicle charging with the use of other household appliances to avoid power outages—although it is recommended that the car be plugged in at night—.

Another way of charging is called opportunity charging or on-route charging. This type of charging is what we do when we go to a shopping center, a public parking lot, a restaurant, a gym, etc. The power chargers are a little higher than those at the destination and allows you to recharge the battery in about 4 hours. Wall chargers are also commonly used. 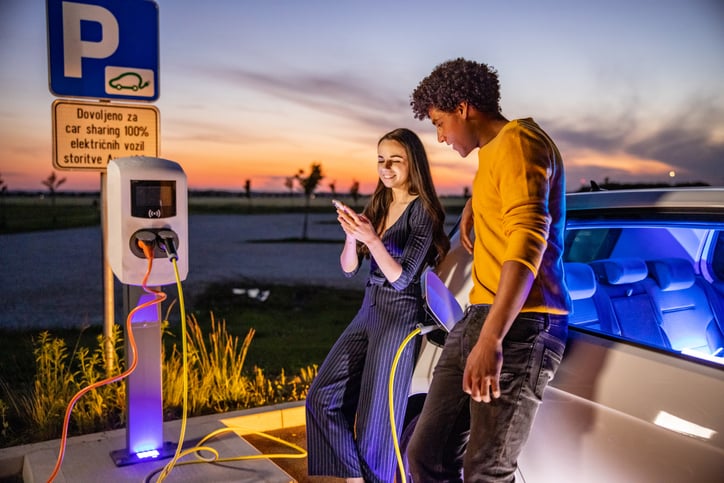 Pole-mounted charging points—or “charging poles”—are easily recognizable, as they are usually present at gas stations, on the street, near some company buildings or public buildings. They allow fast battery charging in 40 minutes, or in less than 20 minutes for ultra-fast charging. However, they should not be abused, as they may affect battery performance.

Finally, there are also high power charging points, both at service stations and other locations in cities and corridors. These ultra-fast devices allow full battery charges in as little as 20 minutes. These are the ones used, for example, by the trucks recently marketed by Tesla, with ultra-fast 350 kV voltage. This type of ultra-fast recharging is essential in countries such as Spain, where it is estimated that between 70% and 75% of vehicles stay parked on the street and cannot be charged at their destination or garage. As part of the “Positive Motion” strategy, Cepsa has committed, together with Endesa, to installing 20 high power charging points every week in Spain and Portugal, with with the goal of having at least one charging point every 200 kilometers of roads on the peninsula by 2030.

And if you can't find a charging point, you can use what is called portable charging: it’s done via a special charger cable that plugs into the mains, either with a conventional or industrial plug.  This type of charging allows you to charge for 100 kilometers in 8 hours.

In addition to the charger, the type of plug the vehicle has and the voltage accepted also have an influence.

One type that is currently in the experimental phase is wireless charging points or inductive charging. They are similar to the latest generation of cell phone chargers: by induction, through a charging platform that works thanks to a device buried in the pavement. They are an alternative that is set up to be one of the best options in cities, since it is not necessary to plug the vehicle into the charging station. Pilot experiments have also been carried out with this system under the roads, so that vehicles can be charged as they travel, avoiding stops and giving them more autonomy.

Every vehicle, every driver and every household has its own characteristics, so choosing the right charging option for each is essential. When in doubt, the best option is to contact the manufacturer and pay special attention to their recommendations. Because, without a doubt, every day we are one step closer to those silent roads and less polluted streets that sustainable mobility is bringing ever closer to our cities.