The Andalusian Green Hydrogen Valley, led by Cepsa with projects in Palos de la Frontera (Huelva) and San Roque (Cádiz), is among the latest members of the World Economic Forum’s initiative “Transitioning Industrial Clusters towards Net Zero”, announced today at the Forum’s Annual Meeting in Davos. The global initiative aims to connect 100 industrial clusters across the world to reduce 1.6 million metric tonnes of CO2 emissions, retain and create 18 million jobs and contribute $2.5 trillion to global GDP.

The Andalusian Green Hydrogen Valley aims to decarbonise local industry and transport thanks to the region’s abundant low-cost renewable energy –essential for producing competitive green hydrogen– and solid electricity grid. The region also boasts excellent options for the use and transport of clean energy by road, rail, air and sea. By joining the World Economic Forum’s clusters initiative, the project by Cepsa and its partners will benefit from the knowledge and best practices of other members. The creation of clusters facilitates public-private and cross-industry partnerships for industries in the same general location to join efforts on decarbonization by shar¡ng risk, infrastructure and natural resources.

Cepsa CEO Maarten Wetselaar, who attended the Annual Meeting in Davos, said: “Green hydrogen is the best low-carbon alternative for hard-to-abate sectors including industry and heavy transport. We see more and more customers keen to commit to green hydrogen consumption and southern Spain offers one of the best price points in Europe to produce it. Cepsa’s two projects in our Andalusian Green Hydrogen Valley, the largest green hydrogen hub in Europe, will help create a commercial construct to meet this demand, decarbonise local industry and begin to provide the scale Spain needs to become a net exporter of clean energy.”

The World Economic Forum launched the “Transitioning Industrial Clusters towards Net Zero” in 2021. The initiative, supported by Accenture and EPRI, focuses on reducing heavy industry asset emissions in regional industrial zones, which account for 15%-20% of global CO2 emissions.

There were nine new industrial clusters from Europe, the United States and Asia announced at the 2023 Annual Meeting, bringing the current total to 17.

Cepsa announced in December, 2022, a plan to invest more than 3 billion euros to establish the Andalusian Green Hydrogen Valley, creating the largest green hydrogen hub in Europe in southern Spain. Under the plan, the company will build two plants at its Energy Parks in Palos de la Frontera (Huelva) and San Roque (Cádiz) with 1 GW of capacity each, producing up to 300,000 tonnes of green hydrogen annually. Development of the project will guarantee the future of industrial employment in Andalusia, generating 10,000 jobs, including 1,000 direct employment opportunities.

The company has also signed an agreement with the Port of Rotterdam to create the first green hydrogen corridor linking southern and northern Europe. 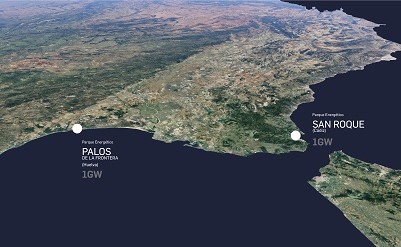