Over the following week, Cepsa will supply SAF to all Air Europa, Air Nostrum, Iberia Express, Ryanair, Vueling, and Wizz Air flights departing from Seville Airport The capital of air transport decarbonization in southern Europe is Seville. Over the next week, more than 220 flights will depart from Seville Airport using sustainable aviation fuel (SAF) from Cepsa. Cepsa, the No. 1 company in Andalusia by sales, is carrying out a deep transformation of its business activity to lead the production of advanced biofuels this decade. As part of its 2030 strategy, Positive Motion, the company aims to become a benchmark in the energy transition and to lead sustainable energy and mobility in Spain and Portugal this decade.

The SAF, produced by Cepsa at its La Rábida Energy Park (Huelva) from olive pits and other plant-based waste from Spain’s olive industry, will be supplied by Exolum to all departing flights operated by Air Europa, Air Nostrum, Iberia Express, Ryanair, Vueling, and Wizz Air from the Seville terminal. This advanced biofuel will cover 400,000 kilometers of an average aircraft's flight, the equivalent of flying around the world 10 times, or of supplying 400 to 500 hours of flight time.

This initiative will prevent the emission of more than 200 tons of CO2, the equivalent to planting more than 2,500 trees. It will allow these six airlines’ aircraft to take off from the Seville terminal with 4.5% of SAF in their tanks, surpassing the 2% target set by the European Union for 2025. Additionally, it supports several of the 2030 Agenda’s Sustainable Development Goals: SDG 7 (Affordable and clean energy), SDG 8 (Decent work and economic growth), SDG 12 (Responsible consumption and production), and SDG 13 (Climate action).

This is the first time that an airport in southern Europe has supplied SAF in this way, and it is also the first time in Spain that the entire value chain has been certified traceable by the ISCC (International Sustainability Carbon Certification) system from the production of the sustainable aviation fuel to physically supplying it. As part of its commitment to promoting and accelerating the decarbonization of air transport, Cepsa will assume the additional cost of all sustainable aviation fuel provided.

Through this supply, Cepsa strengthens its position as a leader in the sale of aviation fuel in Andalusia, where last year it supplied fuel to more than 40,000 aircraft.

The presentation of this initiative, held this morning at the Seville airport, was attended by representatives of Cepsa, Aena, Exolum, the Association of Airlines (ALA), Air Europa, Air Nostrum, Iberia Express, Ryanair, Vueling, and Wizz Air, as well as several representatives of public administrations, such as the Minister for Industrial Policy and Energy, Jorge Paradela, and the Mayor of Seville, Antonio Muñoz, who expressed their interest in decarbonizing air transport and the shared goal of advancing in the energy transition and promoting sustainable tourism.

Carlos Barrasa, Cepsa's Director of Commercial & Clean Energies, highlighted the company's commitment to facilitate the decarbonization of its air transport customers. "As leaders in supplying jet fuel, at Cepsa we want to be our customers' best ally to move forward together in the energy transition and help them achieve their sustainability goals. This initiative is yet another example of the capabilities our company has and will continue to develop. As part of our Positive Motion strategic plan, we will produce sustainable aviation fuel on a large scale by 2030 to provide our aviation customers with 800,000 tons of SAF annually," he said.

For his part, Sergio Millanes, director of Seville Airport, said: "Today, together with Cepsa, we celebrate Seville Airport's commitment to the environment and Aena's commitment to sustainable aviation. As stated in our Climate Action Plan, Aena plays an integrating role across the aviation value chain (producers, distributors and airlines) in the implementation of SAF with the aim of helping to speed up the decarbonization of the sector."

Andrés Suárez, Global Strategy & Innovation Lead of Exolum, said: “At Exolum we have infrastructures that are fully adapted to the storage and distribution of sustainable fuels. In addition, we collaborate with producers in the development and promotion of advanced second-generation biofuels, and with different European alliances to contribute to the elimination of barriers to promote this type of sustainable fuels that have the great advantage of allowing the use of both existing infrastructures and the fleets of aircraft and vehicles of end users, without the need for additional investments."

On behalf of the different airlines, Javier Gándara, president of ALA, stated: "The aviation industry reaffirms our commitment to achieving net-zero emissions by 2050 and we are committed to the use of SAF because it is one of the main solutions to achieve our goal. SAF is effective in reducing CO2 emissions, and it is a solution that is already available and can be blended up to 50% with conventional fuel without requiring any adaptation. But to be successfully implemented, it needs to be scaled up to be accessible and affordable."

Antonio Muñoz, Mayor of Seville, said: "Seville is once again a reference in innovation, research and the fight against climate change. Once again, our city – and specifically our important airport – is the stage for a pioneering project for the use of biofuel for the decarbonization of transport. This is the first time that an airport in southern Europe uses this technology, undoubtedly positioning Seville at an international level and reinforcing the strategy that we are deploying as a city and in which both administrations and private companies must play a role. As mayor, I would like to thank Cepsa for trusting Seville for this great project."

At the closing of the event, the Councilor for Industrial Policy and Energy, Jorge Paradela, highlighted the importance of this pioneering alliance, which reflects the airline industry's commitment to the energy transition and "connects closely with the commitment made by the Andalusian Government to move towards the decarbonization of transport and to place Andalusia as a leading region in the fight against climate change." He said: "The evolution towards eco-fuels represents a qualitative leap when it comes to promoting research and technological innovation and generates an unparalleled opportunity for Andalusia, which already has the largest production capacity of biofuels in Spain, to strengthen its leadership at a European level in carbon neutral energy alternatives."

This initiative is another step in Cepsa's 2030 strategy, Positive Motion, through which the company seeks to lead sustainable mobility and the production of biofuels and green hydrogen in Spain and Portugal, thus becoming a leader in the energy transition.

To achieve this, it has made a solid commitment to the development and production of advanced fuels from circular raw materials that do not compete with food, such as used cooking oils or biodegradable waste from different industries, which enable emissions to be reduced by up to 80% in comparison with conventional fuels. Specifically, Cepsa will produce 2.5 million tons of advanced biofuels annually by 2030, of which 800,000 tons will be sustainable aviation fuels.

The company has established an ambitious roadmap to cut its emissions, placing it among the benchmark companies in its sector. Specifically, by 2030 it will reduce its CO2 emissions (Scope 1 and 2) by 55% compared to 2019 and the carbon intensity index of its energy products sales, which includes Scope 1, 2 & 3 by 15-20%, with the goal of reaching net zero emissions by 2050. 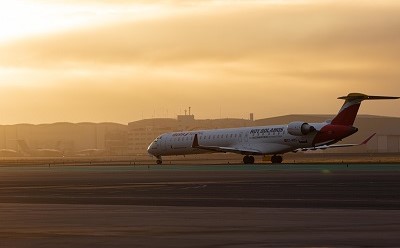