Cepsa in partnership with IONITY, the leading pan-European high-power charging network comprising the BMW Group, Mercedes Benz AG, Ford Motor Company, Hyundai Motor Group, and Volkswagen Group—including Audi and Porsche—continues to advance in developing the most extensive public intercity electric mobility network on the Iberian Peninsula with the inauguration of the first two service stations with high power charging points in Portugal. This is a new milestone in the partnership between the two companies, after launching the first high-power charging corridor on the Iberian Peninsula linking the cities of Madrid and Barcelona at the end of 2020.

The facilities are located at two Cepsa’s Service Stations in the Portuguese town of Almodôvar (in the Beja district), on both sides of the A-2 highway, which connects Lisbon with southern Portugal. These state-of-the-art facilities are equipped with two recharging points each and are prepared for four additional high-power chargers to be installed depending on demand.

The IONITY chargers, which use 100% renewable energy supplied by Cepsa, use the Combined Charging System (CCS) - the most widespread European charging standard for current and future generations of electric vehicles. With a capability to charge at powers up to 350 kW, they are among the most powerful on the market, allowing drivers of electric vehicles to travel long distances without adding extra charging time to their trip.

The inauguration of these facilities also marks the launch of the Via Verde Eletric, a project of Brisa (the main private operator of Portuguese highways), in which Cepsa and IONITY have ownership, to create the largest long-distance electric charging network in Portugal with the installation of reliable high-power electric chargers at the main service areas on Portuguese highways.

José Aramburu highlighted: "The energy transition represents one of the most significant challenges of our time, and, at Cepsa, we are fully committed to it. To this end, we are adapting our energy solutions to the needs of our customers, developing new ways of using and distributing energy to serve people, businesses, and society in general."

Allard Sellmeijer noted that "As a result of our partnership with Brisa and Cepsa, IONITY now has high-power charging stations in Portugal, enabling long-distance electric vehicle travel with the guarantee of a reliable high-power charging network with state-of-the- art technology along the way. These facilities are located at strategic locations, providing connections with our Spanish infrastructure and in the rest of Europe."

Throughout 2021, 35 Cepsa’s Service Stations located in the main peninsular corridors will have these chargers. Both companies' objective is to cover the main intercity roads in Spain and Portugal and the connection routes with the rest of the European continent by installing high-power charging points at strategic locations.

Cepsa and IONITY reached a collaboration agreement in 2018 for the installation of electric charging stations on a preferential basis in the energy company’s Service Stations in Spain and Portugal. The extension of Cepsa's network, with more than 1800 Service Stations in Spain and Portugal which offer a comfortable place to stop and take a break or have a snack, is a fundamental part of the project since it allows chargers to be installed at strategic locations along the main intercity roads of the Iberian Peninsula. 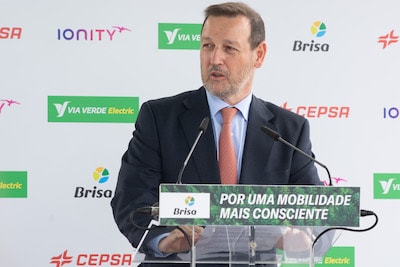