Today, Cepsa and Vueling, an airline that is part of IAG, signed an agreement to accelerate the decarbonization of air transport by researching and producing sustainable aviation fuels (SAF). Both companies prioritize the development of these sustainable fuels as a tool to further reduce the carbon footprint of air transport and contribute to the goals of the 2030 Agenda and the fight against climate change.

These fuels will be produced from circular raw materials that do not compete with food resources, such as used cooking oils, non-food animal waste or biodegradable waste from various industries, and will make it possible to reduce aircraft emissions by up to 80% compared to conventional kerosene.

The partnership will also work on the development of new energy alternatives such as renewable hydrogen and the electrification of Vueling’s ground fleets, which include supply vehicles, baggage loading and unloading operations and aircraft assistance.

During the signing event of this new sustainable aviation partnership in Barcelona, Carlos Barrasa, our Director of Commercial & Clean Energies, said: 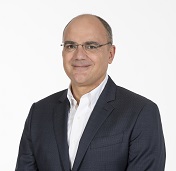 Marco Sansavini, CEO of Vueling, emphasized: "Vueling is fully committed to the environment. We are part of IAG, which, in October 2019, became the first airline group in the world to make a commitment to reach net zero carbon emissions through its Flight Path Net Zero program. This collaboration with Cepsa reinforces the collective work that we must all do to find a viable and sustainable solution for air transport, a key industry in a country where 80% of tourists travel by plane."

This agreement is in line with the European Commission's Fit for 55 package, which includes a legislative initiative called 'RefuelEU Aviation’ that aims to boost the supply and demand of aviation biofuels in the European Union to 2% use by 2025, 5% by 2030 and 63% by 2050. This partnership supports several of the 2030 Agenda’s Sustainable Development Goals: SDG 7 (ensure access to affordable, secure, sustainable and modern energy), SDG 8 (promote inclusive and sustainable economic growth, employment and decent work), SDG 12 (ensure sustainable consumption and production patterns) and SDG 13 (take urgent action to combat climate change and its impacts).

As one of the main producers and suppliers of aviation fuels on the Spanish market, this new agreement with a leading airline consolidates Cepsa’s aim to become a leader in the clean energy sector and to spearhead the decarbonization of air transport. As part of its new strategic plan, Positive Motion, the company is developing an ecosystem focused on accelerating the decarbonization of industrial customers and air and maritime transport, as well as the company itself, through the production of green molecules, mainly renewable hydrogen and biofuels. Cepsa aspires to be the leading biofuel producer in Spain and Portugal by 2030 and produce 2.5 million tons annually, with a particular focus on the sustainability of air traffic by producing 800,000 tons of SAF every year.

For Vueling, this partnership forms part of its sustainability plan. All actions are carried out in the context of the Flightpath Net Zero program, which includes the goal of reaching net zero CO2 emissions by 2050. As part of IAG, the airline shares the vision of leading the way in terms of sustainability within the global airline industry. Specifically, IAG was the first airline group in Europe to make a commitment to operate 10% of its flights with sustainable aviation fuel by 2030.

Vueling has 25 Airbus 320 NEO, a new generation of aircraft that reduces CO2 emissions by 18% compared to the previous model, A320ceo. What’s more, since 2013, the company has added sharklets, an aerodynamic device placed on wingtips that reduces emissions by 4%, to 78% of its fleet. The company is also developing various initiatives to reduce its carbon footprint by reducing the weight of its aircraft. Since 2019, it has replaced all the seats in its entire fleet with a new, lighter model, and in 2020 it digitized all its aircraft documentation. These measures have reduced fuel consumption by more than 13,000 tons per year, the equivalent of almost 40,000 tons of CO2. 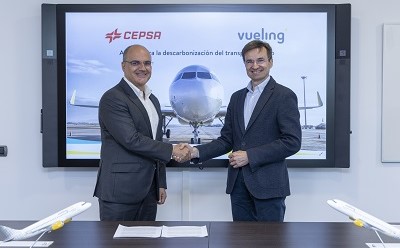