November: Cepsa's Month for Emergency Drills on the Canary Islands

Cepsa has planned four major emergency drills for the month of November, as part of its annual prevention and safety improvement plan at its industrial centers on the Canary Islands. The first of these has already taken place at the company's Dique del Este fuel storage facilities, in Santa Cruz de Tenerife.

In addition to this exercise, another will be conducted this week at Petrocan's facilities in the capital of Tenerife (located in La Jurada), a Cepsa subsidiary dedicated to the storage and supply of fuels for ships. This will be followed next week by an exercise at Petrocan Gran Canaria, at the Port of Las Palmas. Finally, a drill will be conducted during the last week of the month, which will take place at the Tenerife Refinery, at the Maritime Terminal.

In all four cases, the self-protection plans for each facility, known as Interior Emergency Plans, will be activated, and in the case of the Refinery, the Interior Maritime Plan will also be activated, as the marine environment will be simulated.

Cepsa, which will deploy a significant amount material and human resources for each of the scenarios, will reinforce the intensity of the exercises through close coordination with a large number of external security and emergency services, activating in each case emergency level 2, which allows for the request of external support resources.

The four drills will involve the active participation of personnel from the different departments of the Tenerife Refinery and Petrocan: Safety, Logistics, Technical Services, Environmental Protection, Human Resources, Communication, etc.

The drills are in addition to the weekly drills conducted at the Tenerife Refinery to analyze the emergency response in any possible scenario, and the more than 30 drills that Cepsa conducts at its other centers on the Canary Islands every year.

Cepsa's Canary Islands Safety Coordinator, José Quintana, says that "the importance of conducting drills lies in the fact that they enable us to be better prepared for any emergency, by testing our self-protection plans. A drill is a way of putting pre-established plans into practice and analyzing the various emergency scenarios that could arise in the event of a real situation."

He adds that "these exercises enable us to learn and continue training personnel, both our own and those of the service companies, and to identify and evaluate the different aspects or procedures that could be improved in terms of the operation of the facilities or our own performance in the event of an emergency. In addition, and this is a crucial aspect, coordination with external security forces and services."

Scenario for the first drill of the month

The scenario chosen for the first of the four drills planned for November was that of a fire at the Dique del Este facilities, caused by a supposed diesel spill, which activated both the fixed and mobile fire and safety systems and the facility's personnel, as well as reinforcement of the refinery's personnel and a team of its own fire department, which went to the area with one of its fire-fighting trucks.

Likewise, the collaboration of the Tenerife Firefighters Consortium and the Port Authority of Santa Cruz de Tenerife was required, coordinated through the Emergency and Security Coordination Center CECOES 1-1-2. In addition, the Autovía de San Andres, the highway adjacent to the facilities, was simulated to be cut off due to the smoke, as well as traffic control on the inner service road by the Port Police. 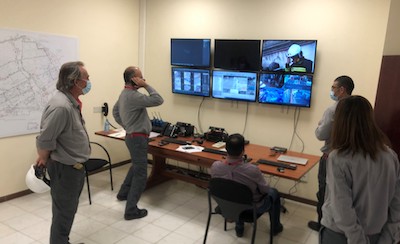