Cepsa, a global energy company committed to sustainable mobility and energy, Enagás Renovable, one of the largest European developers of renewable gas projects, and Alter Enersun, a company dedicated to the promotion of renewable energy generation facilities, have signed an agreement to jointly develop a green hydrogen plant in Huelva, connected to a solar power plant, within the Andalusian Green Hydrogen Valley.

The new green hydrogen plant, whose electrolysis capacity will reach 200 MW, will be operational in 2026 and its production will be used to supply Cepsa's own industrial consumption and will enable the manufacture of advanced biofuels. The photovoltaic facility will also have a capacity of 200 MW.

Alter Enersun will be in charge of developing the photovoltaic plant, which will be located on land belonging to the Port Authority of Huelva in the capital city, and Cepsa and Enagás Renovable will be responsible for the construction and commissioning of the hydrogen plant at the Cepsa Energy Park facilities in Palos de la Frontera.

The production of renewable energy close to the place where it will be consumed means an important optimization of the projects and a better use of the synergies between the companies.

The agreement between the three companies was presented this morning at the La Rábida Energy Park and the presentation was attended by Carmelo Rodero, mayor of Palos de la Frontera; Bella Verano, delegate of government of the Junta de Andalucía in Huelva; Gabriel Cruz, mayor of Huelva; Pilar Miranda, president of the Port of Huelva, and José Luis Menéndez, president of the Association of Chemical, Basic and Energy Industries of Huelva (AIQBE).

"We have two new allies for the Andalusian Green Hydrogen Valley to decarbonize industry in Huelva and promote its sustainability and competitiveness. We’re joining Cepsa’s technical capabilities, experience and sector knowledge with that of Enagás Renovable and Alter Enersun to start up a large-scale green hydrogen plant, which will be self-sufficient with renewable energy."

Luis Iglesias, COO of Enagás Renovable, said the collaboration between the three companies "allows progress in the promotion of renewable gas projects in Spain, responding to the decarbonization needs of industry and the transport sector in their different modalities".

José Luis Morlanes, CEO of Alter Enersun, highlighted that "we are going to build a 200 MW photovoltaic plant to generate green hydrogen that will take advantage of the sun's energy to improve the environment. We are proud to participate in Cepsa's Positive Motion strategy, which contributes to the energy transition and to achieving energy autonomy in Spain".

Cepsa and Enagás Renovable have also signed a complementary agreement for the production and purchase of biomethane. Biomethane will be used to replace natural gas in various industrial processes, thus contributing to a reduction in CO2 emissions.

Biomethane, a renewable gas with characteristics similar to those of natural gas, is obtained through a biogas upgrading process. The latter is produced by anaerobic digestion of organic waste, a natural process that accelerates the production of this ecological gas with a high concentration of methane, thanks to the action of bacteria that live in the absence of oxygen.

This new alliance is part of Cepsa's 2030 Positive Motion strategy, through which the company is transforming itself to become a benchmark in the energy transition, leading sustainable mobility in Spain and Portugal, as well as the production of renewable hydrogen and advanced biofuels. Cepsa will promote the decarbonization of its customers, as well as its own activity, reaching net zero emissions by 2050.

Enagás Renovable considers collaboration between companies a pillar of its corporate strategy in order to promote the development of renewable gases and contribute to achieving a carbon neutral economy. Enagás Renovable is thus committed to an energy model that abandons the use of fossil fuels and normalizes the use of renewable energy sources, helping to protect the environment and people. 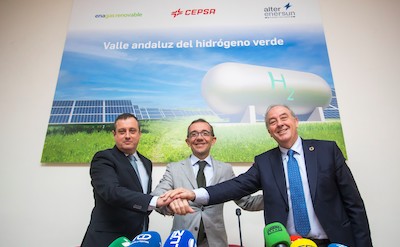