The Third Vice-President and Minister for Ecological Transition and the Demographic Challenge, Teresa Ribera, has highlighted the start of the dismantling of the Tenerife Refinery as a new milestone in Spain's commitment to lead the energy transition in Europe.

Teresa Ribera visited this morning the Cepsa Refinery in Santa Cruz de Tenerife in an event full of symbolism as it was the first refinery to be built in Spain, in 1930. Under the slogan 'Historic commitment to the energy transition of the Canary Islands', Cepsa has called all the administrations to make visible the beginning of the dismantling of its refinery in the Canary Islands. The event was also attended by the President of the Canary Islands, Ángel Víctor Torres; the President of the Cabildo of Tenerife, Pedro Martín; the Mayor of Santa Cruz de Tenerife, José Manuel Bermúdez and the CEO of Cepsa, Maarten Wetselaar.

During the event, the Third Vice-President and Minister for Ecological Transition and the Demographic Challenge, Teresa Ribera, used the refinery dismantling project as an example of constructive collaboration between administrations and the public-private sector. "A cooperation that closes a stage and will return to the people of Tenerife a transformed space, with new environmental resources and an approach of energetic and social sustainability", she said.

The president of the Canary Islands, Ángel Víctor Torres, has stated that "we are betting on a different model and an example is this action on the island of Tenerife". In this sense, he recalled that in November 2021 the Canary Islands society signed its commitment through the Canary Islands Agenda for Sustainable Development 2030 and in February 2022 the authorization was given for the dismantling of the Santa Cruz Refinery, so that "what was a document became a concrete fact".

He added that it is "an exemplary action for the EU, the Canary Islands, Tenerife and the city itself" and explained that "a land that has been used to provide fuel is being turned into a clean, model space, participated in by all". He specified that in 2025 there will be no depot and in 2030 there will be a space of half a million square meters to be handed over to the citizens of Santa Cruz and the Canary Islands as a whole. At the same time, he emphasized the role played by Cepsa in the islands during the last 90 years, "in which it has provided jobs, has supplied fuel to the Canary Islands and, moreover, is part of our reality".

The president of the Cabildo of Tenerife, Pedro Martín, said that today is "an important day for Santa Cruz and for the whole island of Tenerife". With the beginning of the dismantling of the facilities, "a process of change begins, focused on a new model of city, with an exemplary urban development, in which the progress of the island must be necessarily sustainable".

In this context, Martín recalled "the pride of belonging that Cepsa workers and their families have always had towards the company", while stressing the importance of maintaining job stability in this new stage. In addition, he said, from now on, "it is time to work from the Cabildo, in collaboration with the City Council of Santa Cruz and the Government of the Canary Islands, with the modification of the Island Management Plan of Tenerife, so that this space becomes what the residents of Santa Cruz and all the citizens of Tenerife need".

The mayor of Santa Cruz de Tenerife, José Manuel Bermúdez, pointed out that today's event is the culmination of a process initiated in 2018, Santa Cruz Verde 2030, "with the municipal, insular and autonomous commitment, and of the company itself, to start hand in hand a transformation process that generates a historic opportunity for the capital."

Bermúdez recalled that the Refinery meant a transformation of the territory, but also a socio-economic transformation of the municipality. "Cepsa's presence in the city gave rise to entire neighborhoods to house its workers, their families," he recalled, "many of whom had access to certain services and rights ... there have been thousands of families who in one way or another have been part of this project."

For his part, Maarten Wetselaar, CEO of Cepsa, highlighted the role that the energy company has played in the social and economic development of the Canary Islands, in addition to guaranteeing its energy supply by more than 65% at present. Wetselaar stressed that the company has "the firm will to continue to be the energy benchmark for the islands and to contribute to their decarbonization in collaboration with all the authorities and economic agents".

The dismantling of the Tenerife Refinery comes after the Canary Islands Government, through the Department of Ecological Transition, Fight against Climate Change and Territorial Planning, announced last January the authorization of the first phase of unit withdrawal from the refinery. This action will be carried out gradually and will last until 2025.

To this end, a schedule agreed with the Canary Islands Government will be followed prior to each action, guaranteeing at all times that none of them will compromise the safety or the activity currently provided by the facility to continue supporting the energy supply of the Islands.

The first measure includes the removal and recovery of the soil of the unit known as Merox, and the second will focus on the environment where the crude oil storage tanks are located, which will also be carried out this year.

The dismantling of the Refinery is linked to the start-up of a new storage and distribution park in the port of Granadilla, scheduled for 2025, where Cepsa already has an administrative concession. This facility will allow the second phase of the project to be undertaken, with the dismantling of the remaining Refinery equipment and the voluntary remediation of the soils. 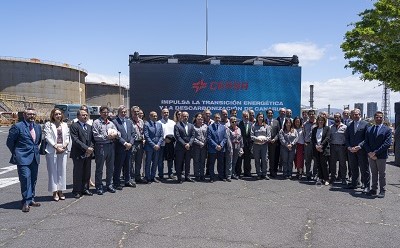