Cepsa has developed the SICMA system to improve management of actions in the event of a hypothetical situation of contamination by chemical substances in the maritime-port area, which has taken two and a half years of work and is already implemented in its industrial centers of San Roque (Cádiz) and Palos de la Frontera (Huelva).

SICMA, an innovative and pioneering system, is the result of the work of Cepsa's Environmental Protection area and its Research Center, together with the Environmental Hydraulics Institute of the University of Cantabria (IHCantabria), through the Retos-Colaboración program of the Ministry of Science and Innovation. It is a prevention and response system that manages large volumes of operational data, such as satellite images and ocean-meteorological data from multiple sources and can predict in real time the trajectory of a potential chemical spill in both the marine environment and atmosphere . The tool assesses the risk of a possible incident, providing action protocols and response strategies.

With this initiative, Cepsa increases prevention and improves the management of hypothetical incidents with chemical substances in the marine and atmospheric environment, in addition to increasing the safety of its professionals in this type of operations and optimizing environmental performance, prevention and response to a marine pollution event, facilitating decision-making in emergency situations.

For José Manuel Fernández-Sabugo, responsible for the management of Cepsa's maritime terminals and director of Cepsa in the Canary Islands, "protecting the marine environment is one of our priorities, and it is a great step forward to have implemented a leading system in this field, and to have done so together with a leading institution like IHCantabria, with whom we have been collaborating for years. This is an example of the company's work to continuously improve prevention systems, in addition to employee training in this area. Cepsa is committed to the safety of its facilities and transparency in its operations."

Ana Abascal, researcher at IHCantabria, noted that "at IHCantabria, we have been developing methodologies and tools to fight accidental contamination for more than 20 years. The close collaboration established with Cepsa over the years has allowed us to combine capabilities to develop technology and new tools that contribute to improving the prevention and response to accidental spills. SICMA is the result of this collaboration. It is a pioneering system to assist in decision making in the event of chemical spills, contributing to the optimization of the response and thereby promoting environmental protection in this type of emergency."

This project reinforces the Athenea system, already in operation for years in Cepsa's industrial centers in Andalusia and the Canary Islands, which has similar features, but is focused on preventing oil spills.

As part of Cepsa's commitment to the environment, protecting water and the marine environment is one of its main concerns. In this sense, anticipation is key, which is why the company is developing safety systems, continuous controls and specific training, in addition to implementing early detection, prevention and response systems, such as SICMA and Athenea.

The Gibraltar-San Roque Refinery (Cádiz) was the first to test the SICMA system in a drill to prevent marine pollution that was carried out last Thursday 17th at the jetty, as part of the Maritime Interior Plan (PIM). 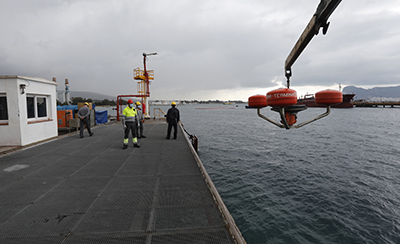