Utilization of residual heat in the raffinate stream

With the modifications made in this project, we managed to improve manufacturing efficiency by reducing the fuel used and emissions into the atmosphere.

HOW DID WE DO IT?

Based on an energy analysis of the Molex II Unit, an important point of energy saving was identified.

A multidisciplinary team, made up of both its own personnel and external companies, has carried out both the engineering and the installation of new equipment / instruments and modification of the existing ones in order to adapt the Unit to the new mode of operation.

The project carried out, which has managed to reduce the thermal consumption of natural gas in the Molex III area, consisted of using the waste heat from the refining stream to heat the feed to the refining column itself. To this end, a heat exchanger has been installed between the process streams, which has made it possible to reduce the consumption of thermal oil in the reboiler of the MO-V2030 refining column.

With the implementation of the project, a final energy saving of 15,180 MWh/year has been achieved, which has resulted in a reduction of the total CO2 emissions in this plant.

The project has been supported by the Institute for Energy Diversification and Saving (IDAE) through the Second Programme of aid for energy efficiency actions in SMEs and large companies in the industrial sector. 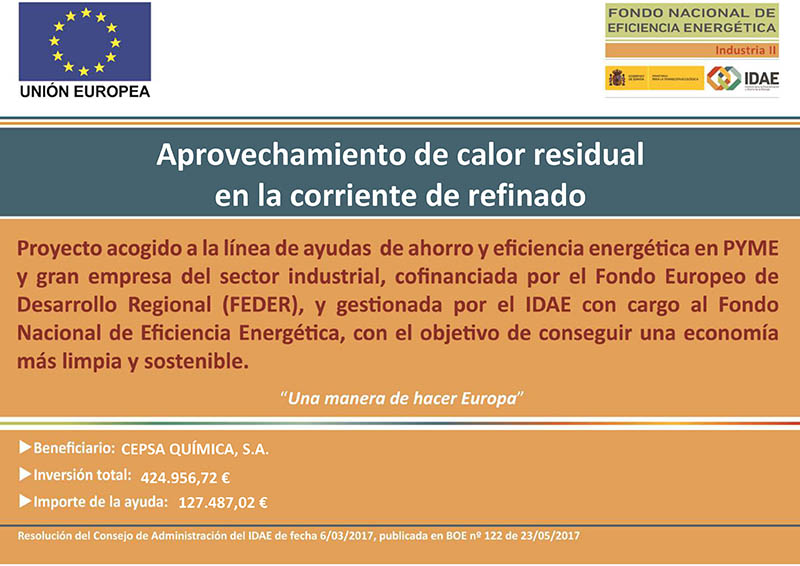 “Each stream of the process is used to the maximum thanks to the constant search for optimization of our Units”.
Daniel Salvador García
CQPM Optimization and Control Engineer